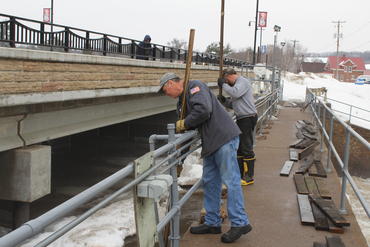 Arcadia officials had no early answers for how the city might raise the significantly higher local costs for a proposed federal flood control plan, or address the worries of some area residents that the network of levees and walls would send water their way. City attorney Terry Madden previewed for the city council last Tuesday the latest price tag for the U.S. Army Corps of Engineer's plan, $36.8 million, leaving the city of 3,000 with the task of raising an additional perhaps $13.8 million. On top of the new higher costs, attendees at a public hearing Wednesday questioned how the flood works would affect those living in the city west of the Trempealeau River and in Dodge, which is downstream from Arcadia. All of the levees and flood walls would be installed along Turton Creek and on the east side of the river.

"Our neighborhood will be affected," said a resident of Willow Street who noted her basement is flooding now because ice jams are raising the Trempealeau River. Keith Jereczek of Dodge said that city has suffered significant flooding, and that he still can't occupy his home because of the flood water. "I've had (Department of Natural Resources and county department of land management) officials tell me Arcadia is creating a shoot that will make what's happening to Dodge worse," Jereczek said. Corps representatives said their hydraulic studies indicate the project would have a negligible effect on Arcadia's west side. They also said their research indicates the change in the water surface level of the Trempealeau River would diminish to zero just south of Arcadia once the controls are in place. Arcadia Mayor Rob Reichwein said he believes the project could reach its goal, but that the new costs are a hurdle. "This is still a good project," Reichwein said. "But we can't keep throwing money away if this isn't going anywhere. We all know what the political climate is. I'm not optimistic." If the project continues, a contract would be awarded in 2022 and construction completed in 2025. Arcadia project manager for the corps, Nan Bischoff, told those at the public hearing that without the entire project "flooding in Arcadia will continue." She said the goal of the plan was to eliminate the flood plain restrictions and insurance costs for Arcadia's downtown, nearby neighborhoods and Ashley Furniture Industries complex.

"The city doesn't have to go with this plan," Bischoff said, "but its goal is to get the city out of the (Federal Emergency Management Agency) flood plain." Madden also noted that modifying too much the recommendations of the study could put the remaining federal money, just over $9 million, at risk. The city's financing so far includes the federal dollars and $14.6 million from the state. A $6 million internal draining project - which was pulled out of the corps" work as the federal price tag grew - is being financed with two federal grants and city borrowing. "We figured we had a gap of $7.6 million until last week," Madden said. "We're concerned, surprised and frustrated." The city has applied for a Department of Transportation grant of $3.4 million to help cover the unexpected costs of modifying railroad tracks for the corps work. Even if that grant comes through, the city would still need $10.4 million. Madden said that if the city maintains it practice of keeping $2 million in borrowing in reserve for emergencies, the city would only be able to borrow $3.4 million for the project. Madden said the other options include getting a specific appropriation from Congress, seeking more state money, searching for additional grants or scaling the project back.

Representatives of U.S. Rep. Ron Kind and Sen. Tammy Baldwin at the public hearing said a specific congressional appropriation could take years. Project modifications could include lowering levees and flood walls. The corps' plan calls for the structures to be high enough to contain a 100-year flood plus an additional three to three-and-a half feet. Corps officials could not estimate how much those changes could affect costs. Corps officials also acknowledged that the $36.8 million price tag is significantly higher than is typical for projects run under the federal Section 205 program. Most studies under Section 205 result in projects costing closer to $15 million. Corps officials say they did consider dredging the Trempealeau River and moving all the structures out of the flood plain, but that both options were significantly more expensive than the recently released plan.