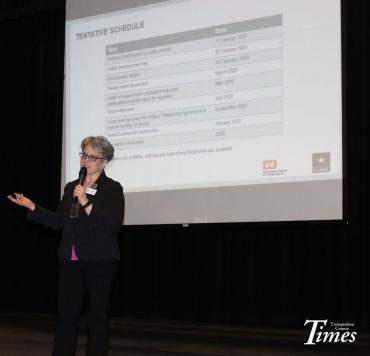 Nan Bischoff, project manager the U.S. Army Corps of Engineers' Arcadia flood control project, explains the corps' tentative design at a public hearing last month. The $36.8 million price tag for the work leaves the city with a $13.2 million local share for which city officials have no immediate solutions. (Times photograph by Debbie Foss)

Arcadia officials agreed to take a small, next step toward completing a study of flood abatement by federal engineers but are holding off on committing fully to the new higher-priced research until the final price tag is clear.

The council Monday evening approved allocating $10,000 to keep the U.S. Army Corps of Engineers moving forward on an assessment of what the city needs to do to control floods, according to Mayor Rob Reichwein. The action comes after city administrator Chad Hawkins told the council a week ago that the price for the study had jumped $93,000 above what the city expected to pay.

The vote means the corps will continue planning work, which had stopped as the city ponders how to fund the increase. “We need more clarification” on final study costs, Reichwein said.

“My frustration level is high,” Reichwein said of the new, higher study costs. “My support has waivered. There’s a lot of other things we could do with that money.”

The latest estimate for completing the corps’ study is $2,010,000, compared to initial estimates of $1.25 million, Hawkins said. That increase comes on top of the corps’ latest estimate for actual flood works construction that now tops $38 million, about $14 million more than the city has available either through grants or borrowing capability.

When asked whether the city might consider abandoning the project, Reichwein said he was unsure. “We have no hard numbers on what this might cost. We have no clue. In 2016, it was $23.8 million and that included internal drainage. We took internal drainage out, pushing the rest back to $18 million. Now it’s $38 million.”

The internal drainage work is being performed separately.

Reichwein noted too that the $38 million is today’s price, and that number could climb by $7.5 million in the two years before the corps expects the project to begin.

“We started this so homes and buildings could be removed from the floodplain, making it easier to upgrade them,” Reichwein said. “But we’re not locked in.”

Hawkins expressed confidence that money could be found. “We know there’s plenty of state and federal money around. I think we can get there,” Hawkins said.

Part of the work the corps needs to complete is an environmental assessment of four sites in the route of proposed levees and dams along Turton Creek and the Trempealeau River.

City officials will ask the corps whether it would consider a proposal by city consulting engineer Michael Davy that two of the sites do not require review.

Davy told the council there is “no value” in investigating two of the locations slated for review, the city’s one-time landfill that was excavated for an Ashley Furniture parking lot and old sewage lagoons that were converted to wetlands 30 years ago.

The excavation of the landfill “has been thoroughly investigated, and besides, the plan calls for material to be added to the location, not dug out,” Davy said. “There’s no work even planned for the lagoon area” which is a 30-year-old wetland mitigations project.

The two sites that would still be investigated include the one-time location of the Arcadia Co-op where Davy said possible fertilizer and pesticides were remediated 20 years ago, and land beneath Pilgrim’s hatchery buildings that would be subject to an easement or purchase for construction, Davy said.