‘I get paid to skip school’ 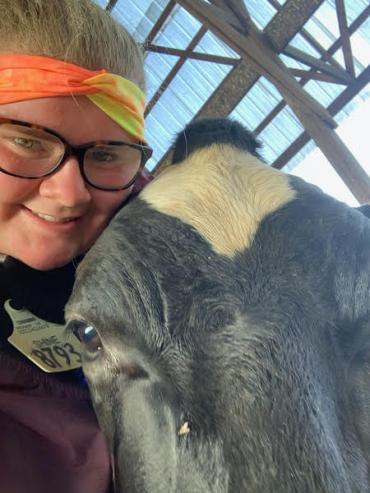 Sarah Burken, a 2022 Gale-Ettrick-Trempealeau High School graduate, completed her youth apprenticeship at her family farm. Burken said the experience confirmed her interest in a career in agriculture, which she plans to explore at UW-River Falls in the fall.            (Submitted photo)

The same joke was made by two Gale-Ettrick-Trempealeau High School students who recently completed a year in the area’s youth apprenticeship program.

The program gives students hands-on experience in the workforce and allows them to get paid and explore a career while still in high school. A variety of career paths are available to students, and the list of area businesses participating continues to grow.

Recent G-E-T graduate Sarah Burken said she didn’t want to sit in classes all day during her senior year. Cody Dooley, finishing the final days of his junior year in the school, joked last week that he thought it was a good deal that he got paid to skip school.

But as the pair opened up to the Times about their work and the program, they shared two very different experiences — Burken’s work on her family’s dairy farm confirmed her interest in agriculture, while Dooley learned that he wouldn’t want to work in the auto industry and switched to have his apprenticeship at a feed mill for his senior year.

Both situations are a success for the program and demonstrate its purpose, coordinator Amy McCutchen said, because students can get a better idea of what their futures might–or might not–look like instead of spending thousands of dollars and multiple years trying to figure it out in college.

“Overall I just think it’s a good experience for them for employability skills—showing up on time, communicating, working as a team, taking direction–I think all of that stuff is good whether it ends up being something that they end up doing long term or not,” McCutchen said.

There were 78 juniors and seniors in the Bluff View Youth Apprenticeship Consortium this year spread across the G-E-T, Arcadia, Blair-Taylor and Whitehall school districts. Students must take at least two classes per year related to their apprenticeship and work 450 hours.

McCutchen oversees students from all of the districts who take part in the program. They meet regularly with McCutchen and each other to compare experiences.

Seniors can repeat the program after participating as juniors, but they have to show further competencies than the previous year.

Burken plans to attend the University of Wisconsin-River Falls in the fall and has hopes of working in agriculture. The youth apprenticeship allowed her to help her family when workers are hard to find while also guiding her future.

She said seeing the veterinarian visit every other Tuesday was her favorite part because growing up she was always at school and missed such visits.

Each apprenticeship is catered to the student and job. Athletes tend to make their schedules so they work in the morning and then come to school in the afternoon. Some students do it the opposite way, but there is flexibility.

Dooley said he was thankful that he could investigate his future now instead of at college when the cost is higher and the stress is, too. He recommended the program to other students.

“While I’m still in high school I get to see different areas of after high school and you get to kind of choose before you’re actually there and then you go. … ‘I messed up, this isn’t where I want to be,’” he said.

“It’s definitely trial and error. You go try it and if you don’t like it, I mean, what’s the worst that happens? You’re still in high school. You can bounce back pretty quick.”