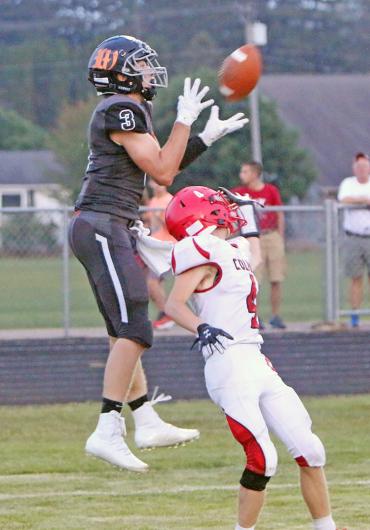 Whitehall’s Devon McCune leaped over a Colfax defender for a touchdown catch during their game on Friday night.            (Times photograph by Andrew Dannehy)

Whitehall senior Jonathan Thorn had already proven himself as a big play threat over the past two seasons, but he took it to another level with four long touchdowns in Whitehall’s 47-8 win over Colfax last Friday night.

The senior scored four touchdowns from more than 45 yards in distance to help the Norse take a 27-0 lead before they added two more scores to take a 41-0 advantage into halftime. In all, Thorn had seven offensive touches for 179 yards and added a 60-yard punt return for a touchdown.

The win was Whitehall’s most lopsided since they scored a 39-0 win over Eleva-Strum in 2013. Whitehall’s game against Arcadia this Friday will be a nonconference matchup between two 1-0 teams. Arcadia defeated Lancaster 22-6 on Friday (see story elsewhere in Sports).

The Norse will open Dairyland Conference play with a game at Melrose-Mindoro next week.

Thorn got going early and the Vikings never quite caught up to him.

The Norse senior’s first touchdown came on a 65-yard pass from Aidan Sonsalla. Devon McCune’s point after made the score 7-0.

Whitehall got the ball back and Thorn struck again, this time taking a handoff from Sonsalla and racing 60 yards for a touchdown. McCune made the score 14-0 with his point after.

After Whitehall’s defense got another stop, the offense didn’t even step onto the field as Thorn took a punt 60 yards for a score.

The Norse got the ball back again and, again, Thorn ended the possession in the end zone, this time with a 46-yard run. McCune missed one of the four extra points as Whitehall took had a 27-0 lead with eight minutes left in the first half.

The Norse got the ball back after a punt and Sonsalla connected with McCune for a 21-yard touchdown. The two then hooked up on the two-point conversion to make the score 35-0.

Whitehall’s defense then recovered a lateral and added another score as Eric Kleinhans capped a drive with a three-yard touchdown run. McCune’s point after was no good, but the Norse took a 41-0 lead into halftime.

Colfax got on the board early in the second half and ran in a two-point conversion, making the score 41-8.

Whitehall got most of the points back almost immediately, however, as Seth Lambeck returned the ensuing kickoff 80 yards for a touchdown. The point after kick was no good.

The Norse finished with 291 yards of offense along with two touchdowns on special teams. It was a balanced attack as they had 120 passing yards and 171 rushing yards.

Thorn ran for 115 yards on five carries and caught two passes for 64 yards. Sonsalla was four-for-six for 99 yards and two touchdowns.