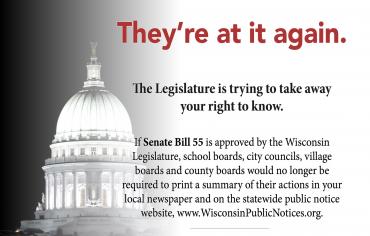 The Wisconsin State Senate has fast-tracked a bill that would irreparably harm government transparency. Senate Bill 55, which is now before the State Assembly, is intended to diminish the public’s access to information about government meetings and shackle independent journalism and citizen participation that are at the very core of American democracy.

The state senate passed the bill 20-12 last week Tuesday, among those voting against the bill was 31st District Senator Jeff Smith. The vote was nearly along party lines as only two of the 20 who supported it were Democrats and two who opposed it were Republicans.

The Wisconsin Newspaper Association (WNA) has vigorously opposed the proposal, which would eliminate the long-standing requirement that local units of government publish vital information about public meetings.

According to the WNA, for more than 200 years, the state’s newspapers have helped ensure our state’s citizens are well informed through public notices.  These notices serve as a critically important independent reporter between units of government and taxpayers, in addition to serving as the official notification vehicle for our court system.

Newspaper publication of notices provides “the necessary verification, certification and archiving that ensures individuals and taxpayers rights are protected and preserved.” While notice publication in newspapers has been a constant and reliable third-party check on governmental actors for generations, Wisconsin’s publishers have worked to continually adapt public notice requirements to ensure the broadest dissemination of public information.

In 2005, the Wisconsin Newspaper Association began digitally archiving all public notices published in the state, making them available online, for free, at WisconsinPublicNotices.org.  This online clearing house of notices from across the state serves as a one-stop shop for notice seekers and can be searched a number of ways.  And, the online posting is provided at no additional cost to the governmental and private entities required to publish public notices.

The public notice process exists to provide independent third-party oversight of government. Government should never be permitted to report on itself. Countries where units of government control their own media fall outside the very definition of a democracy.

Newspapers are the only form of notification that provides the necessary verification, certification and archiving that ensures that taxpayers’ rights are protected and preserved.