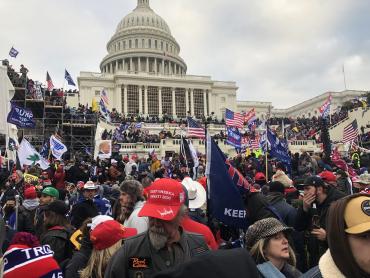 Dave Estenson of rural Coral City took the above photo while attending a protest in Washington D.C. last Wednesday.(Submitted photo)

“We live in bubbles of our own stories, our own facts. We have to get out of our bubbles. The other side isn’t all wrong and it’s not evil. After what I witnessed, the scales fell from my eyes.”

Dave Estenson of rural Coral City was more or less already in the neighborhood when he decided to witness history last Wednesday in Washington D.C. He came away jarred and with a shift in perception.

“I remember laughing at the (broadcast) of a CNN reporter standing in front of fires and pronouncing the protests that started it were ‘mostly peaceful,’” Estenson said. “Now I know what’s it’s like. What happened in Washington was mostly peaceful. It’s infuriating to see how this is being portrayed.”

Estenson arrived late to the events in Washington last week, and so could not describe how a demonstration protesting what attendees contend was an election stolen from President Trump turned into a siege of the Capitol building. By the time he arrived, protestors had been pushed out of the Capitol. He said he did witness an attempt to break into another door in the building, an effort pushed back by tear gas.

As he was standing on a platform above the Capitol steps, “I watched people come down rubbing their eyes and others were bleeding.”

For Estenson, he walked away with a new perspective. “We live in bubbles of our own stories, our own facts. We have to get out of our bubbles. The other side isn’t all wrong and it’s not evil. After what I witnessed, the scales fell from my eyes.”

He’s convinced that many of those at the demonstration and who got swept up into a mob “have gone home and are thinking ‘what the heck did we do, we’re not like that.’”

The owner of a trucking company, Estenson had driven to Pennsylvania and decided to go to Washington to “witness history.” He rented a car, took the Metro and got near to the Capitol grounds at around 3 p.m. He walked about a mile before he saw crowds on the Capitol lawn and steps and a tower set up for Joe Biden’s upcoming inauguration.

“I had no idea what had been going on. I didn’t listen to the radio on my drive, and only caught up a little on social media on the train.”

By the time he arrived, the more violent aspects of the protest were over, including the shooting of one protestor and an assault on a Capitol police officer that later resulted in his death. “I want to be clear, I did nothing illegal.”

Estenson said he believes the trigger for the assault on the Capitol could have been “from the extreme left or the extreme right.

“From where I was watching, I saw skinny white kids dressed in all black who identify as Antifa, and I saw guys walking around in fatigues who could have been militia. But who caused the trouble, I can’t say.”

Estenson, who was a police officer for 14 years in Minnesota and Wisconsin, could only speculate on the actions of the Capitol police, which have been criticized as ineffective. “Trump rallies are usually peaceful. This was not the kind of thing police would expect.” As for the images of some officers seeming to let the rioters into the Capitol, “maybe it was tactical, to hold off until they could re-group.”

As Estenson was leaving the scene before a curfew took effect, he stopped to help “a typical, normal looking old lady” get over a fence. “She had her coat wrapped around her. She said, “Look what I got,” opened her coat and showed she had a riot helmet. I saw another young kid, as normal looking as you could imagine, carrying away a riot shield.”

As he walked to the Metro — with flash bangs and plumes of tear gas behind him — he struck up a conversation with two young people who, it turned out, needed a ride to Pennsylvania. “I’m convinced God put me there for them and to see what happened at the Capitol.” He later spoke with a Vietnamese Trump supporter who said he feared for the United States as he had feared the communist takeover of his country.

Estenson said the response to the assault on the Capitol could divide the nation even more. “Voices on the right are being silenced even more. That’s going to build more frustration.”

For his part, Estenson is taking his stab at reconciliation. A friend at a Berkley, California, radio station asked him to describe his trip. “Maybe it got heard?”