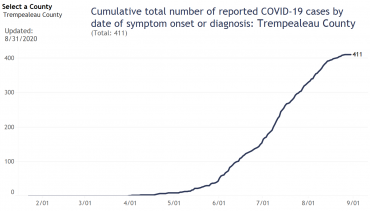 As the number of new COVID-19 cases declines and the rate in which Trempealeau County residents test positive has decreased, the county health department has introduced a new metric to help residents determine the risk of spreading the virus.

The county announced the new metric last Friday. It includes three categories with the risk determined by color. The color green indicates the lowest risk level followed by yellow, orange and red.

The categories include seven-day averages for cases per 100,000 people, new hospitalizations and percentage of cases that were due to community spread. The only category the county received a “red” rating was in community spread as 47.4 percent of the cases within the last seven days had unidentified origins.

The county has not has any new hospitalizations within the last seven days and saw a rate of 9.2 new cases per 100,000 people per day, which put it in the yellow category.

The new metric can be found on the county health department’s website: https://co.trempealeau.wi.us/departments/health_department/index.php

While the decision on how to use the metric was made by the health department, a community stakeholder group was formed to provide input and discussion on how the next process can be communicated to county residents. The group is made of community members, parents, and business representatives from Gundersen Tri-County, Mayo Clinic, Ashley Furniture, Pilgrim’s Pride, UW-Extension, area school districts, and two small businesses. The group represents the Arcadia, Ettrick, Osseo and Trempealeau areas.

In addition to the new metric, the health department announced they would no longer be providing daily  case number updates, instead doing so every Thursday.

That announcement came at the end of a week in which the county saw the fewest number of cases and lowest percentage of positive tests since the beginning of June.

According to the Wisconsin Department of Health Services, there were 13 new cases in Trempealeau County last week, the fewest since the last week in May. The total number of new tests issued dropped below 200 for the first time since the end of May and the number of people who tested positive — 7.3 percent — was also the lowest since June began.

Not included in those numbers are the 50 tests conducted as part of a community testing site in Arcadia on Monday.

Monday marked the end of the month of August in which the county saw 106 new cases with a positive test rate of 7.7 percent. That followed July, which had 187 new cases and a rate of 12.2 percent. A face-covering mandate by Gov. Tony Evers went into effect on Aug. 1 and has been credited for slowing the rate of the spread locally.

Locally, the spread has, apparently, been mostly limited to the Arcadia area. Of the new cases in the county, nine were listed as being in the Arcadia area by the DHS. The only other area with more than two new cases was Trempealeau, which had four.

The majority of the active cases are also in Arcadia as that area has had 18 new cases over the past two weeks. Independence has had seven cases in that span, Trempealeau has had six, Whitehall and Eleva/Strum have both had three new cases while Blair/Ettrick and Osseo have had one new case in the last two weeks.