County will see new board, mayor and some vacancies 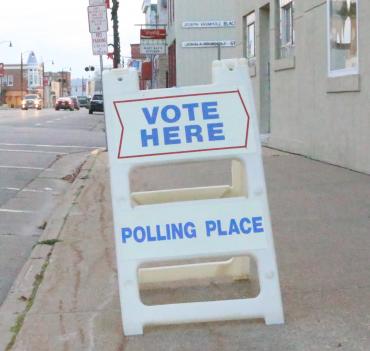 While two county board districts have the three candidates needed to trigger a February primary, some county municipalities have no prospects at all for open council seats.

In mayoral races, Arcadia will get a new mayor while the incumbents in Whitehall and Independence are running without opposition. Last Tuesday was the deadline for candidates to file for the April election.

Primaries to narrow a field of three to two contenders will be held Feb. 15 for county board District Five, where incumbent Beth Killian faces challenges from Andrew Todd and Paul Loesel.  Also set for a primary vote is District 12, where Robert Baecker and Kerry Franks are opposing incumbent Tim Zeglin.

There are no candidates for county District Four. In five other districts, only the incumbent is running. After an extended deadline for District Seven, a seat now held by Joe Feltes who is not running again, the only candidate remains Kevin Adams Dunn.

In the general election April 5, incumbent council member Kevin Mayzek will face one-time Arcadia mayor John Kimmel to succeed Rob Reichwein who chose not to run for a third term as mayor. Kimmel was the city’s mayor from 2006 to 2016 before being removed from office in a recall. Mayzek is also running to represent the Second Ward.

Arcadia also has a vacant council member spot, in the Third Ward, after incumbent Marlys Kolstad decided not to seek a new term.

There are also vacancies on the Independence council in the Second and Third wards. Second Ward Incumbent Riley Foltz is not seeking re-election and Brad Rebarchek, the incumbent in the Third Ward, did not file papers either to run or to announce his non-candidacy. Incumbent Robert Baecker is seeking a new term as mayor and Cleo Skroch as alderperson for the First Ward.

Blair incumbent Dennis Stephenson is running unopposed in Ward One, and incumbent Jill Anderson will compete with Daniel Zawacki for the Ward Two seat. What would have been a contest for the Blair Ward Three seat ended when it was discovered that David Donnelly and Jeremy Tranberg had some of the same names on their nominating petitions. Because the duplicates signed Donnelly’s paper earlier, he will remain on the ballot.

In Galesville, incumbent First Ward representative Randy Larson is being challenged by Tory-Kale Schultz. Kelly Kreger in the Second Ward and Jean Wallner in the third are seeking re-election unopposed.

The towns of Arcadia, Trempealeau and Gale may also see new officials who are selected in town caucuses. The three must hold caucuses before Jan. 21.

Voters in the Times coverage area will all have choices to make regarding who to elect on their school boards in the April election.

All five schools in the Times area — Arcadia, Blair-Taylor, Gale-Ettrick-Trempealeau, Independence and Whitehall — will have at least one contested race this year, though only one will require a primary election.

In Blair-Taylor, Daniel Zawacki will challenge incumbent David Thompson for the District One seat, representing Blair. Blaine Koxlien and Neil Kniseley will run for District Two with two spots available. Koxlien is currently on the board and Kniseley will look to replace Jeff Stalheim who is not seeking reelection.

G-E-T is the only school that will require a primary as Tara Jergenson and Adam Leavitt are challenging incumbent Patricia Malone in the town of Gale. The primary will be held Feb. 15 with the top two vote getters moving to the regular election.

In April, incumbent Kari Marley will face Deb Lakey for the town of Caledonia seat while Larry Moore will be challenged by Sara Olson in the village of Trempealeau.

Independence will have four people competing for two spots. Included in that group is incumbent board president Joe Bragger and member Leah A. Matchey. Challenging them will be Jenny Solberg and Mike Franks.

In Whitehall, Dave Pientok and Amy Bergerson will compete to replace Leah A.W. Johnson, who is not seeking reelection.