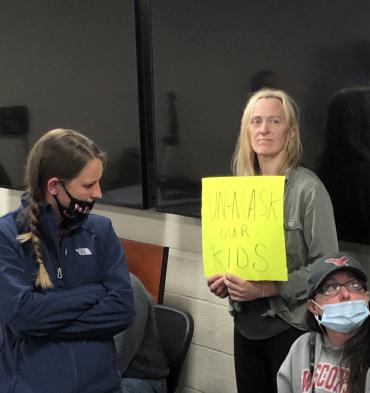 Roughly 20 protestors derailed a Gale-Ettrick-Trempealeau school board meeting on Monday, seeking to have mask mandates loosened. The board cancelled their meeting after some audience attendees refused to wear masks. The meeting will be rescheduled at an alternate venue at a date and time to be announced.             (Times photograph by Zac Bellman)

Monday’s regular meeting of the Gale-Ettrick-Trempealeau school board was adjourned just as soon as it got under way, as a crowd of roughly 20 anti-mask protestors had board members leaving the room for their safety.

Board members Gene Hogden, Harold Olson and Mark Kopp, as well as district superintendent Michele Butler, remained in the room to attempt to restore order. A standoff for upwards of 45 minutes included crowd members attempting to appoint each other to what they viewed as vacated seats, calls for Galesville police that were answered and a call for Trempealeau County District Attorney John Sacia to intervene that was not. Board president Hogden summarized the affair once the crowd finally dispersed with an expletive-laden assertion of the public’s right to comment.

“There’s no doubt, they have every right to bitch about that, some people want to just bitch about it,” Hogden said of those protesting the district’s masking policy.

Administrators pleaded with the crowd to wear masks so other board members could return to the room, but several refused, citing medical exemptions. Board members Paul Kinzer, Todd Roessler, Pat Malone, Paul Halderson, Larry Moore and Kari Marley retreated to the hallway. Butler said the decision to adjourn was made after several board members expressed discomfort with conducting the meeting while at least half of the crowd remained unmasked.

Heather Fritsch, a member of the county’s Liberty Alliance that was behind the protest, claimed that the district’s decision to uphold a mask mandate caused her to remove her second-grader from the district.

While Fritsch added that she had taken down the names of board members who left the meeting to pose challengers in an upcoming election, others in the crowd were not prepared to wait. Several comments from the crowd suggested a desire to appoint their own members to fill out the seats of those who left the room, which Butler and other administrators maintained they did not have the right to do.

Heather Busse, another vocal member of the protest, said her fifth grade son with sensory processing disorder and third grade daughter with type-1 diabetes have also struggled to acclimate to masks.

“It has been a difficult time for him with the constant changes and having fabric over his face, along with breathing difficulties and anxieties,” Busse said. “She is coming home every day with headaches until she gets that mask off and takes deep breaths.”

Two Galesville police officers arrived around 15 minutes after the scheduled start of the meeting, with one attempting to calmly affirm the district’s right to impose rules within the confines of the building. The conversation devolved as the officer and the crowd spoke in circles around the issue for several minutes, with the officer acknowledging the lack of precedence in their jurisdiction.

“It may start happening more,” one member of the crowd responded, as others requested Sacia’s legal intervention.

BREAKING: the Gale-Ettrick-Trempealeau School Board has gaveled their meeting closed after a group of a couple dozen residents have entered the meeting without masks to protest mask use in the district. pic.twitter.com/7d88SWCG2a

Hogden finally addressed the room once more after several more minutes of debate, explaining that a last-minute venue change to allow for more spacing without notice would not be a legal open meeting. He announced the meeting was cancelled, and that a rescheduled meeting time in the performing arts center would be announced with proper notice and opportunity for public comment. He added that three to four board members would not feel comfortable attending if the audience was not masked.

“We are not trying to exclude you from the meeting, we just need a venue where it’s a better setup for this many people, because right now we’re not even socially distancing folks,” Butler added to Hogden’s remarks.

The comment elicited a “We don’t care,” and “We’re good on this end,” from two protestors not wearing masks. Fritsch also again proposed having members of the crowd sworn into what they viewed as vacant seats.

“They walked out for safety, they didn’t walk out because they stepped from their position,” Butler responded, dismissing the notion that the seats were up for grabs.

Olson added that the board would consult with legal counsel, and post outside the rescheduled meeting whether masks would be required to enter.

Butler said after the meeting that the district had kept their mask mandate in effect, even after Gov. Tony Evers statewide mandate fell by Wisconsin Supreme Court order on March 31, to keep students safe and avoid mass quarantines.

“You have one student that’s positive, and now you’re having to quarantine an entire class, or an entire grade at your school,” Butler said of positive COVID-19 cases without mitigation efforts. “Our goal is to keep kids in school. To keep the kids safe.”

As for their legal footing post-mask mandate strikedown, Butler said their legal counsel has informed them that they are within their rights as a district.

“Just like we can have a dress code, we can have certain safety codes in place, and we are told this would fit under the same level of rule you can uphold within a school,” Butler said.

Butler added that while there has been a vocal segment of the district population against masking, there has also been plenty of positive feedback as well.

“Every time that there’s some pushback against the rule, I have at least that many or more parents saying ‘thank you,’” Butler said. “Many parents are very concerned about the safety of their students.”

A rescheduled regular meeting of the G-E-T school board was not announced by press time.