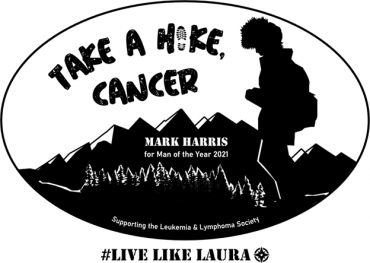 Independence High School graduate Laura Olson was considered an active, adventurous and fun individual, to honor her and raise money to help cure the disease that took her life, her family is planning a fundraiser that fits her lifestyle.

Olson passed away on Nov. 12, 2016 at the age of 29 from Primary Mediastinal Large B Cell Lymphoma. On May 15 from 11 a.m. to 3 p.m. area residents are invited to “Take a Hike…Cancer” at Pietrek Park — located along Highway 93 between Arcadia and Independence.  Activities planned for the day fit what Olson would’ve liked to do, including hiking or playing volleyball. At 12:30 that day, the sand volleyball court at the park will be dedicated in her honor.

The event is just one part of a fundraiser with a goal of raising $50,000. Doing so would also help Mark Harris, who was Olson’s boyfriend, win the Leukemia and Lymphoma Society’s (LLS) Man of the Year award. The winner of the award is determined based on fundraising.

Olson participated in a CAR-T Cell Immunotherapy clinical trial at Seattle Cancer Care Alliance which has led to advancements for that treatment to be used not only for various types of Leukemia and Lymphoma but now prostate and other cancers.

“Laura, Mark, friends and our family would be thrilled to see more advances to occur so no one would have to lose an active, adventurous, fun individual to cancer like we did,” Doreen Olson, Laura’s mother, said.

The family chose Pietrek Park because Doreen Olson was a charter 4-H member and grew up next to the park. Her family camped there and has spent years volunteering for restoration projects. A donation was made to improve the park’s trails at Laura’s request, as they now have boardwalks, a prairie trail was established in Laura’s memory.

“I feel it is one of our unknown gems in our county,” Doreen Olson said.

The Class of 2005 — Laura’s graduating class — donated a tree in the park and to have the volleyball court created in her memory.

Laura’s final New Year’s Resolution with Harris was to hike every state park in Wisconsin. Her last hike was in August, 2016 and her family members have picked up trying to hike not only the state parks, but trails throughout the state.

Harris is attempting to complete the list as part of the fundraising campaign. While the Independence event is one fundraiser, anybody wishing to donate can do so online at: https://pages.lls.org/mwoy/wi/madison21/TakeAHikeCancer.

A $25 donation per hike will have the hiker’s name listed on an interactive map and be included in the team’s goal to cover as many state and national parks as possible. The fundraiser runs until June 3. More information is available on the website.