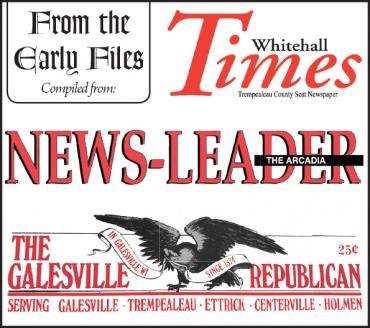 Daily and season admission charges for the new “family aquatic center” that will be built in Whitehall probably will be about twice as much as for the existing swimming pool. The city council’s special pool committee met last week to discuss rates for the new facility, which probably will be built starting this fall. A major increase in these charges was one of several proposals to come out of the discussion.

Negotiations between the Whitehall Teachers Association and the district school board over the teachers’ master contract used to be acrimonious affairs that dragged out, literally, for years. But now, apparently, they are more like a love-fest, based on comments by both sides at Monday’s board meeting, when a two-year contract was formally settled. Negotiators for the board and the WTA were effusive in their praise for each other’s conduct in the bargaining.

City Hall Park in Independence has all-new playground equipment, courtesy of the Rainbow Homemakers club. Volunteers installed more than $18,000-worth of slides, swings and jungle-gym-type gear in the park, which is located on Bugle Lake near the city’s downtown.

Citizen volunteers of the Arcadia Public School District are invited to assist in the construction of the “press box and storage building” at Cashen Field.

Mike and Cathy Lund of rural Arcadia began raising Texas Longhorns on their rural Arcadia farm. Mike Lund said the horns can have a 48- to 52-inch spread from point to point.

Highway 53 through Galesville could be re-opened by August – about two months earlier than projected – Dave Moss, a foreman for Lunda Construction, said.

There’s a body of water in Galesville where nature and wildlife have joined hands to create a unique environment – and it’s not Lake Marinuka. It’s not really a lake, but a pond in the midst of an estimated 45 acres of wetlands. To many, the wetlands between the uppertable and Hwy. K are a breeding ground for mosquitoes. A long-time city resident said the space should have been filled in for years ago “It’s no good for anything – except skunks,” he said. “There are a lot of skunks in there.” Tim Babros, who lives in the Little Tamarack area and specializes in wetlands and water quality for the state Department of Natural Resources, said it’s a live with a wide variety of wildlife. He said it gives the city a unique nature preserve, though one that’s almost entirely privately owned.

Flames early Saturday destroyed a barn on Winnebago Road in Galesville that was built to replace a barn that burned to the ground on the same site 39 years ago.

The new Whitehall municipal swimming pool opened last week Wednesday, appropriately enough, the first day of summer. Although the weather was cool, the heated pool attracted over 125 swimmers on opening day. Swimming lessons began this week Monday, but due to the unusually large enrollment in the beginners’ class, the schedule has been changed.

Three more persons have announced their candidacies for Trempealeau County offices. Margaret O’Brien of Arcadia is running for clerk of courts on the Democratic ticket. On the Republican ticket are county clerk candidate Carolyn Berns of Whitehall and Joyce Killen of Independence, who is running for register of deeds.

Two longtime members of the Arcadia Board of Education will retire in July, following the annual meeting. Conrad Christ will complete a 12-year, three-term stint on the board while Ernest Sobotta will finish 10 years serving the entity.

Gary Kulig fanned 15 and walked six as the Raiders right-hander gave up just one hit in an 11-0 win over G-E-T.

City employees worked Sunday to mark the streets for parking in the business section. The work was done that day to avoid parked cars as much as possible, and the bright yellow lines should remain for several months to come. Careless parking inconveniences others who are looking for a place to leave their cars while on shopping missions. For the convenience of all, motorists are asked to make sure their car stands between the yellow lines.

The J.E. Garaghan agency reports the sale of the 160-acre, former Tom Everson farm in Pigeon, owned by Wilbert Beck, to Alston Amundson of Osseo. The personal property, crops and machinery on the Raymond Hoff farm near Blair have been sold to Paul Kjos and wife of Whitehall, who will rent from Mr. Garaghan, who has purchased the place.

The supervising teachers of Trempealeau County, Miss Ruth Schlicher and Miss Pearl Biesecker, have left Whitehall for their annual summer vacations. They will report back Aug. 15. Miss Dorris Sander, county superintendent, will have a two-week vacation later in the summer.

The courthouse personnel gave a farewell party last Thursday for Harold Pryse, FHA administrator for Trempealeau County. The county office will be officially closed Friday of this week when Miss Doris Knudtson will also terminate her employment, and will return to her home at Chetek.

Paul Tyvand, recently of Milwaukee, is staying with his parents, Dr. and Mrs. J.C. Tyvand, while making preparations to open a garage in Arcadia. Paul has purchased the former Gullickson garage building there, and has secured the Ford agency for that area.

Miss Marjorie Schaefer and Lester Brennom of the courthouse attended conventions for clerks of circuit court and register of deeds in Madison on Saturday. Miss Schaefer accompanied Dr. Torson, Independence and Clarence Johnson, Whitehall, who attended the republican convention.

Charles Suchla takes over the former Joe Klonecki tavern business which he purchased recently and will also have the management of the old armory for dances and other public gatherings. Joe Klonecki’s plans for the future are indefinite at this time.

The work of wrecking the old Whitehall school is now completed, and excavation for the new building has commenced. Material for construction is coming on the ground very rapidly, and building activities will be in full swing next week.

The Whitehall Mill and Power Co. has received a carload of Dakota spring wheat. Their mill is running to full capacity and has ready sale for all the flour it can produce. They use nothing but the best grade of wheat.

Last Friday was the hottest day of the season, the mercury reaching 91, as noted by Weather Observer Haugh. The heat continued into the night.

The handsomest truck in town is Caswell’s, and John Van Tassel, the driver, is proud of his beautiful red motor vehicle.

Postmaster Burton of Strum was in Whitehall Monday night, assisting Wright and Paulson in installing their radio system. Einar Johnson accompanied him.

The second meeting of the Shakespeare Storytelling Club was held Tuesday afternoon on the lawn at the C.E. Butler home.

Arcadia was ready for the “monstrous” Fourth of July celebration, sponsored by the American Legion and Company A. The program included drills by Company A, a parade with and business men’s floats (anyone with an automobile was asked to decorate it and join in the parade), songs by the municipal chorus, a patriotic address, dashes, broad jumps, tug of war between east and west sides of the river, a ball game, contests with grand prizes, fireworks, dancing, rides, stands and two tented shows.

Frank Kiedrowski, Dodge, was recovering at a Winona, Minn. hospital from an accidental burn by sulfuric acid to his face and eyes while at work in his garage.

The Coral City school closes Friday of this week with a picnic.

William Lennon has the foundation for the new addition to his residence completed.

John Wellan has purchased two lots on the corner of Dodge and Camp streets, where he designs to put up a residence.

Anderson and Ekern have the rock on the ground for a new law office, on the corner of Main and Kelly streets. It is to be 16 by 28 feet and furnished in a modern style.

A number of Whitehall Woodmen visited the Arcadia camp Monday evening and gave their neighbors a few pointers in expert initiation of candidates. Our “team” put through three candidates in “apple-pie” style.

Little Ernie, a seven-year-old son of Archie Wood, was run over by the rear wheel of a lumber wagon Monday evening. Dr. Parker thinks the boy will fully recover, should not complications from the internal injury set in, nothing of which nature is thus far evident.

There will be a grand Fourth of July dance given at Opera Hall on Saturday night, July 3, to which all are cordially invited. Extensive arrangements are being made to make this ball one of the most enjoyable occasions which ever took place in the village, and none should miss the happy event. Secure your tickets early to avoid the rush.

Blair -- A.W. Smith, the expert tinsmith, has made a miniature fish pond out of tun and stocked it with rock bass. It occupies a conspicuous place in the front part of the Herried Bros. Mfg. Co. store. It attracts considerable attention and exhibits the mechanical skills of its maker.

Blair — A “merry-go-round” was anchored here last Saturday. The field for the expenditure of nickels in this direction was found to be unprolific, and the machine was pulled out early this week.

Arcadia — Peter Senty has returned from Chicago, where he purchased the machinery for the equipment of his laundry, which he expects to have in operation the first of next month.