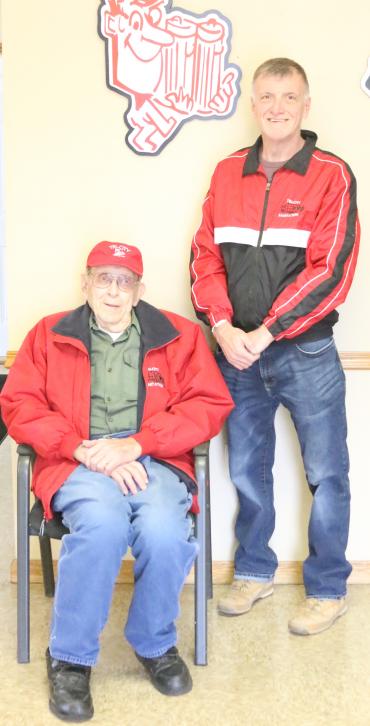 Saturday marks the 50th anniversary of the May 1, 1971 start of curbside garbage pickup services in Whitehall, Blair and Independence by the new business that had been established earlier that year. Peter Pientok Construction of Independence had purchased what had been known as Whitehall Trucking, owned by the late Gerald Schansberg, and renamed its subsidiary Tri City Sanitation Services.

LaVerne Pientok remembers the early days of garbage when those who created it had to dispose of it, “no questions asked.”

Governments eventually added dumps and created trash pickup services. In Independence, Pientok remembered, garbage was picked up by a man with a horse and a wagon, occasionally with assistance from the chief of police. Blair received pickup from Blair Dray Lines, owned and operated by Helmer Strand and Whitehall followed a similar pattern using city-owned equipment and forces, including Police Chief Ben Mahle.

Whitehall businesses were served by Whitehall Dray Line, owned and operated by Norman Garson and Sons. The Whitehall Dray Line business was acquired by Ronald “Ronnie” Bautch. Bautch later sold his operation to Lloyd Fischer, owner of Fischer Trucking. Fisher provided his services until selling the trash business to Schansberg.

Schansberg purchased a 16 cubic yard packer unit, which enabled him to cut his trips to the city dump, because of being able to compact the materials. During the Schansberg era, the DNR required a permit for any equipment with compaction capabilities. He expanded his operations into Blair, Independence and a couple of area townships. In early 1971, he offered his business for sale.

The business was purchased by Peter Pientok Construction Inc. of Independence. The garbage business was named Tri City Sanitation Service, Inc., and was a subsidiary of the construction business.

Then run by LaVerne Pientok, son of the late Peter Pientok, the business started out with two trucks and La Verne’s cousin Tom Pientok as the first driver. Tom went on to work over 25 years for the business. It was initially located at the former Cripps school property on Highway 93 between Independence and Elk Creek.

In 1985, Peter Pientok Construction ceased operations and La Verne Pientok purchased the Tri City assets. Not long after that, the business moved to its current location, which had been the site for the Trempealeau County Highway salt shed.

That was about the time that garbage collection became a lot more complicated. State Department of Natural Resources regulations for landfills became more stringent and most local disposal sites were closed down by the late 1980’s and early ‘90’s.

As a result, Tri City was hauling garbage in its packer trucks from the four communities it served-it had added Pigeon Falls not long after start-up, purchasing the route from Howard Olson. (Tri City had also added accounts in the rural areas). The trash was hauled to larger landfills in Black River Falls, Eau Claire and La Crosse. In response, Tri City built a transfer station in Whitehall in 1996 and purchased larger trucks capable of hauling “roll off” boxes on the longer trips.

In 1993, the third generation of the Pientok family joined the business. Dave Pientok returned to Whitehall and purchased the business from his father in late 1993.

Besides the residential and commercial pickup routes, the company rents out dumpsters and construction boxes. That means keeping track of about 180 roll-offs of 12, 20 and 30 cubic yards and over 1,500 two- to eight yard dumpsters. They also have 26 receiver boxes and 12 compactor units to haul larger volumes.

The company’s vehicles combine to travel over 400,000 miles per year, hauling over 20,000 tons of solid waste and construction/demolition materials to landfills in Eau Claire, La Crosse, the Exel Energy incinerator on French Island and their own C & D landfill on Schansberg Road. At $65 per ton disposal fees, plus transportation and labor costs, that adds up to over $1.5 million.

“Together, we hope to continue to provide the same quality services that strengthened the business in the past 50 years,” La Verne Pientok — who continues to stop in and “help” at the age of 91 — said.

Dave Pientok said that the company has come a long way in 50 years.

“Now we need to strive for efficiency and serving our customers the next 50. A huge thank you to all of our customers we have served in the past. We can’t do an open house right now due to COVID but we are working on something when we can to thank everyone,” Dave Pientok said.