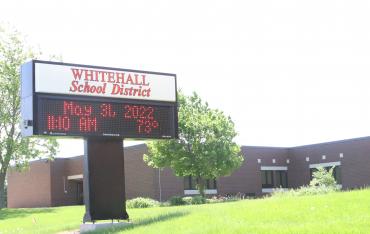 Those hoping the Whitehall School District would solve the need for more child care providers in the area might not have to wait as long as previously thought.

The board had discussed the possibility of building an Early Learning Center (ELC) — which would house a child care center along with four-year-old kindergarten classrooms — but decided at its April meeting to pause those plans and instead focus on renewing its operating referendum in the November election. Last week Monday, however, the board may have changed its mind.

The concern in April was that the district would be asking too much of taxpayers at one time and that the operating referendum would get lost in the shuffle. While that remains a consideration, board members also suggested that running the referendum for the ELC in November would get more of a response.

“From a voter standpoint, you’re going to get a truer number in November than in April,” Dave Pientok, board member, said.

“I think November is the hot season,” Jason Molis, board president, added.

The board instructed school superintendent Mike Beighley to get updated cost estimates. Should the district decide to take the project to a referendum, it would need to be approved by August.

The uncertainty regarding costs was part of the reason the board had elected in April to hold off on the project. Beighley said he would make sure the district was comfortable with the financial aspect.

“You all know me well enough to know that if I’m not comfortable with the price, you will know,” Beighley said.

Another consideration toward running the referendum in November is the inability to split the construction projects. In addition to building an ELC, the board has considered adding a multipurpose room to the school. Because state statute only allows the district to ask two questions per calendar year, the ELC and the multipurpose room would have to be combined in one question with the operating referendum as another.

Board member Dave Estenson, who in the past has said he would not support the school building an ELC, said he wants the project to be separate.

“I don’t like having the daycare and the multipurpose room in the same question,” Estenson said. “It’s two different issues. It’s something we need in the school versus something we want to start.”

Board member Byron Fields responded “you could argue that we need both.”

Molis pointed out that if the ELC and multipurpose room fail as a joint proposal, they could go back to referendum with the projects split in April.

Beighley said that based on his projections in February, doing the joint building project along with renewing the operating referendum, would cost taxpayers roughly $1 per 1,000 of a property’s assessed value for the first year and less than that going forward.

Beighley said he was concerned that area residents would view the operating referendum as the district asking for more money, when it is a renewal of what the district is currently operating with.

“I may be getting to be old and cynical, my concern is people who intentionally misconstrue the information,” Beighley said. “We’ve seen what false information does, people are willing to make up anything and everything to get their desired response.”

He said the money for the operating referendum is already built in because of a lack of funding from the state. Ultimately, though, he said he wants to be honest with the tax base.

“We’ve always trusted folks to tell us what they want, this isn’t any different,” Beighley said.

In other matters, the board approved a 5.5 percent increase and a five-year contract with Pape Bus Service. While the contract is for five years, Beighley said the increase in cost is a one-year agreement. Neither the district nor Pape Bus Service wanted to extend financial aspects of the contract beyond one year “because one of us will be out of whack going forward,” Beighley said.

The contract will be reviewed after the 2022-23 school year.

“We’re exceptionally happy with what they do for us,” Beighley said.

The board also approved the hiring of Amanda Franks as the elementary school physical education teacher. Beighley said she could also do some coaching for the district and has interest in beginning a girls golf program in the fall of 2023.