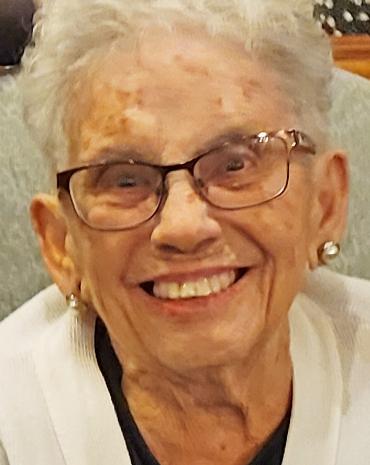 Arlene was born August 28, 1926, in Milwaukee to Rudolph and Lily (Wilke) Schaik. She was united in marriage to William “Bill” Dietsch, and together the couple had two children. Arlene began working as a seamstress at a young age and excelled in her trade after years of working in a clothing factory. She was able to utilize this skill even after she and her family moved north in 1972, to own and operate the Trempealeau Fishing Float. Arlene was known to be a hard worker and often juggled more than one job, including working at Gale Manufacturing, waitressing at the Garden of Eatin’, and cooking at the Trempealeau Fishing Float.

After the death of her husband, “Captain Bill”, Arlene continued to waitress and hem clothing. It was while she was waitressing at the Garden of Eatin’, Arlene met her husband, James “Jim” Kline. The couple enjoyed 22 years together before his passing in April of ’22. Her sewing skills and precise alterations were well-known throughout the area, as at one time her daughter-in-law, Patti, said that she had “been in every man’s pants in Trempealeau County” and threatened to put on Arlene’s business cards. In her spare time, Arlene enjoyed shaking dice with the girls in Pine Creek and being with her family.

She was preceded in death by her parents; husbands; grandson, Nicholas Dietsch; and brother-in-law, Orville Hansen.

A funeral service was held Friday, June 24, 2022, at 10:00 a.m., at First Presbyterian Church in Galesville. Reverend Michael Hibbs officiated. Family and friends were welcomed for visitation one hour prior to the service at church. Burial took place Saturday, June 25, 2022, at 1:00 p.m., at Highland Memorial Cemetery in New Berlin, WI.

To express condolences to her family online, please visit www.wozneykillianfh.com.