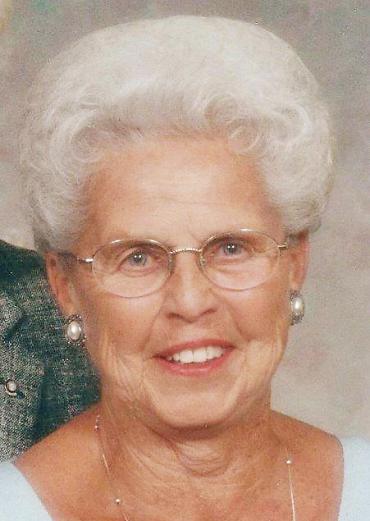 Dolores was born February 19, 1927, in the town of Northfield, to Olger and Emma (Mork) Olson. She grew up on the family farm where Norwegian was spoken. She was baptized and confirmed at the South Beef River Lutheran Church, rural Osseo. Dolores went to Holen Grade School and graduated from Whitehall Memorial High School in 1945. After graduation, she worked for a family in Highland Park, IL.

Upon her return to Wisconsin, she married Gaylord O. Stuve, March 2, 1946, at the South Beef River Church. They spent most of the 72 years of their married life in Whitehall.

Dolores worked at the Snack Shop, Trempealeau County Extension Office, John O. Melby & Co. Bank, and the Trempealeau County Agricultural Stabilization Conservation Office. She was the former treasurer of the Whitehall Women’s Study Club and a member of the American Legion Auxiliary.

Dolores and Gaylord did not have children of their own. She enjoyed all the neighborhood kids so much. They all were very special to her and she loved spending time with them, watching them grow up and have families of their own.

Dolores enjoyed her home, making wonderful meals from the huge variety of vegetables grown in their garden, sewing, knitting, making Lefse and feeding the birds. She was an avid bird watcher and knew every type of bird that visited her feeders. After Gaylord’s passing, she found the time to read more and looked forward to Packers game days.

Gaylord was in road construction. This enabled them in the winter months to spend time in Ft. Meyers, FL, and later Yuma, AZ. They made life-long friends from around the country and Canada at both winter locations. Dolores also enjoyed their trip to Alaska. Dolores and Gaylord were quite adventuresome. For their 10th wedding anniversary in 1956, they drove 2,500 miles from Whitehall to Acapulco, Mexico, in their new Chevrolet.

Funeral services will be held Friday, February 25, 2022, at 11:00 a.m., at Our Saviour’s Lutheran Church, with burial in the Lincoln Cemetery, both in Whitehall. Pastor Peter Jonas will officiate. Friends may call one hour prior to the service.

Memorials can be directed to either Our Saviour’s Lutheran or South Beef River Lutheran churches.

Tussen takk, Dolores, for being such a wonderful sister, aunt, neighbor and friend! You will be missed, but you have created such warm memories. We all will cherish you forever.