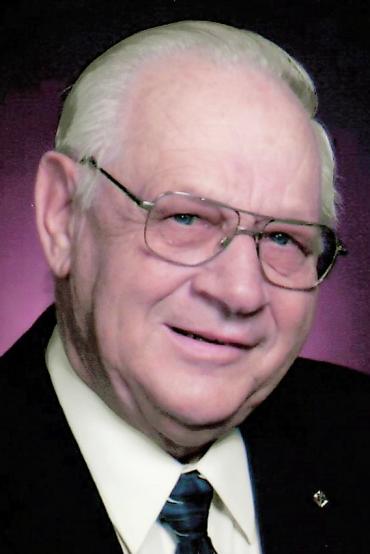 The couple lived in Enterprise, AL while Ev served in the U.S. Army. They moved to Portage in 1958, and later to Baraboo from 1962-66, and Wisconsin Dells for a few years. They settled in Baraboo in 1969.

He attended Independence schools from grade school until high school, then graduated college from UW–River Falls. He was a teacher at Dorchester, later enlisting in the U.S. Army as a Sergeant in both Fort Benning in Georgia and Fort Rucker in Alabama; and after honorable discharge from the U.S. Army, he returned to teaching in Portage.

Ev was the Boy Scout Master for several years for Troop #93. He enjoyed camping at Double KD Ranch with a pink camper, as well as camping with family and scouts. He loved helping people with any building projects, he was always willing to lend a helping hand. He was a member of Knights of Columbus #746 and Elks Club; a devout member of St. Joseph’s Catholic Church in Baraboo; a member of the St. Joseph Parish Council, acting as the president for several years, and ushered for many years. He was involved in the pancake breakfasts for the Knights of Columbus.

Ev adored his grandchildren and always took the opportunity to go on school trips or other functions with them. His grandchildren and great-grandchildren were extremely important to him. He enjoyed gardening, canning, playing cards, dominos, working on his HAHSA; a waste oil burner to heat the home and the office, and he went to many farmers and businesses to collect their waste oil.

A memorial mass is being held Thursday, November 18, 2021, at Noon,  at St. Joseph’s Catholic Church in Baraboo with Father Jay Poster officiating. Visitation will be held from 10:00 a.m. until the time of the service at the church on Thursday. Inurnment will follow at St. Joseph’s Catholic Cemetery with military honors. Redlin-Ertz Funeral Home is assisting the family.

In lieu of flowers, please consider a donation to St. Joseph’s Catholic Church in Baraboo.

As Ev would often say, “Don’t take any wooden nickels.” and “Keep smiling.”