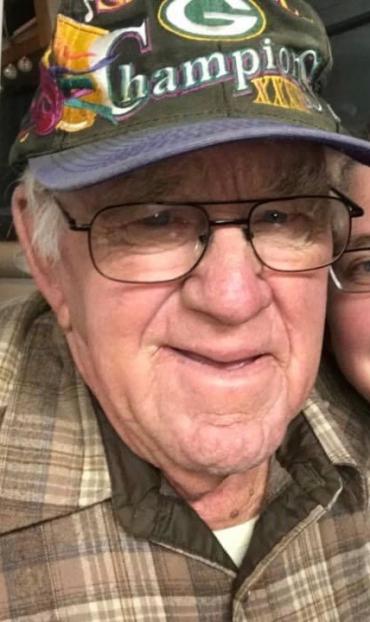 Gene was born in Beaches Corner, April 27, 1935, to John and Gina (Anderson) Johnson. The youngest of four children, they lived on a farm and he attended Beach School through 8th grade. Gene graduated from Blair in 1953. In August of 1955, he married the love of his life, Bonnie Thompson. Their first adventure together was their honeymoon to Niagara Falls and Canada. They had $150 to last their eight-day trip. Amazingly, they managed to see all the sights, stay in hotels (where they had to show their marriage certificate in order to get a room together), dress up every night for dinner out, and only spent $147.52!

In their early life together, Gene and Bonnie lived in a little bungalow in Janesville, and Gene worked at the Chevrolet plant. It was there that they first expanded their little family and welcomed their daughter, Lynnette. In the spring of 1957, they returned to Blair where Gene worked at Central Building Yard for ten years. During that time, they welcomed three more children: Kristy, Darcy and Dayton. In 1967, Gene switched gears and worked as a car salesman in Black River Falls. He then went out on his own and established Gene’s Car Sales in Blair, and people to this day remember the nice, white-haired man who sold them their first car.

Bonnie and Gene continued to foster the seed of adventure they planted on their honeymoon, and traveled the country with their children, going to the World’s Fair, Disneyland and so many incredible places in between. And, as much as they loved their family, they greatly valued time spent as a couple and would vacation with the kids one year, and by themselves the next, always planning and saving for where the road would take them next.

In 1979, they took their boldest adventure and packed up and moved across the county, where they would settle in Concord, California. There, Gene earned his General Contractor License, qualifying him to build huge skyscrapers. Gene decided to stick to smaller jobs instead, and without spending a dime on advertising, grew a name for himself of quality work, keeping him busy for the next 21 years. On occasion, his satisfied customers would request a larger project than Gene could handle by himself, so he would call in some of his kids and grandkids to fly out to California and help. Gene always took great pride in his work and projects, and it showed.

Gene and Bonnie also opened their home to anyone that would like to visit. Their children and grandchildren made many wonderful memories, traveling to California once a year where they were able to experience a world so different than small town Wisconsin. From taking a ferry to Alcatraz, to riding a Trolley on the streets of San Fransisco, trips to Napa Valley and the mind-boggling giant Sequoias, Bonnie and Gene gifted their family with the love of travel and adventure and experiences that some only dream of.

During their time in California, Gene and Bonnie continued to travel the world, making friends at every stop. They went to Germany and Austria and enjoyed many cruises. They also purchased the first in a series of many adventure vehicles. They started with a van, and made many fond memories in their Tioga and other models over the years, traveling the country and coming back to Wisconsin to visit their growing family every summer. Eventually, their motorhome would become more than just a hobby. In 2000, Bonnie and Gene retired and sold their house and many of their belongings and became full-time ‘Snowbirds’, ‘Snow Blowers’ or ‘Sun Bums’, depending on who you ask. They wintered in places like Desert Hot Springs, Arizona, and eventually fell in love with the location and people of Dixieland Park in Harlingen, Texas. They spent the next seventeen amazing winters, calling Harlingen home. For most of those years, Gene worked as a handyman, making small repairs for folks throughout the park. He and Bonnie were regulars at happy hour, and if there was music playing in the club house, they were sure to be dancing the night away.

In addition to working hard and traveling, some of Gene’s hobbies included watching the Packers and Brewers play. During their time in California, he was even known to some as a traitor, cheering on the 49ers! Gene also enjoyed coffee and cookies, Old Fashions, and sharing the newspaper with neighbors.

In 2018, Gene and Bonnie hung up their motorhome hats after an incredibly long run, and moved to an apartment in Blair. Gene definitely slowed down in his later years, but still enjoyed the things he loved until the very end. Gene will be remembered by many as one of the kindest men to ever grace the face of this earth. His legacy of hard work and adventure, love of family, and dedication to his wife of 65 years, will be carried on and forever held close in the hearts of his family and all of the lives he touched.

He was preceded in death by his parents; a brother, Hensel (Lilah) Johnson; a sister, Jeanette (Vernon) Nyen; a brother, Duane Johnson; a brother-in-law, Merlin Thompson; a son-in-law, Len Abrahamson; and an infant great-grandson, Jackson Holmen.

Memorial services will be held Wednesday, March 10, 2021, at 1:00 p.m., at Jack Funeral Home in Blair. Pastor Paul Sannerud will officiate.

Friends may call one hour prior to the service.