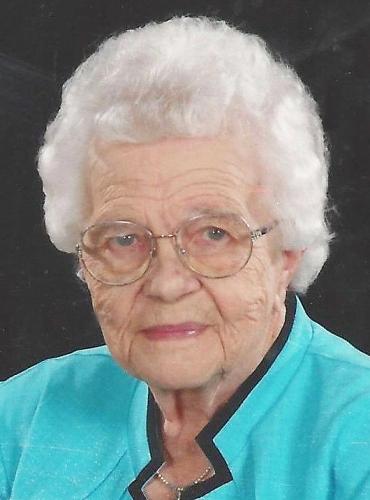 Leona Muriel Christianson, 96, of Mondovi, and formerly of Eleva, passed away peacefully, Wednesday, December 15, 2021, at The Homeplace of Mondovi.

Leona was born March 30, 1925, in Bruce Valley, rural Strum, a daughter of the late Harvey and Jessie (Larson) Olson. She was baptized and confirmed at Chimney Rock Lutheran Church. On November 14, 1942, Leona was united in marriage to Morten T. Christianson at Eleva Lutheran Church Parsonage with Pastor Wichmann officiating. Leona and her beloved husband lived on the family farm in Norden until 1979, when they moved to Mondovi.

She belonged to several Norden organizations. Leona cleaned homes for many fine families in both Eau Claire and Mondovi for many years. She also worked at NWHC as a file clerk until October of 1998.

Leona had a love of gardening, dancing, playing cards with her friends, and will be long remembered for being a wonderful cook and baker. Leona also held a special place in her heart for her beloved kitties.

Besides her parents, Leona was preceded in death by her husband, Morten; two children: Carol Maug and Jerry Christianson; son-in-law, Frank Cox; and by her five siblings.

A funeral service for Leona was held Tuesday, December 21, 2021, at 1:00 p.m., at Trinity of Norden Lutheran Church in rural Mondovi. Luke Pederson officiated. Burial followed at the church cemetery. A visitation was held Sunday, December 19, 2021, from 3:00 p.m. until 5:00 p.m., at Talbot Family Funeral Home, Mondovi Chapel and again on Tuesday, from 12:00 p.m. until the hour of the service.

The family would like to take this opportunity to send a heartfelt thank you to Leona’s great-granddaughter, Valicity Bjorlund, for all of her exceptional and loving care given to her over the past years.

Condolences and memories may be shared with the family at www.talbotfuneral
homes.com.