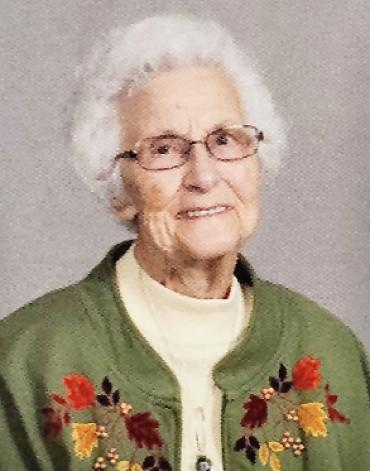 Nona was born to Harold and Agnes (Nordahl) Letson of rural Taylor, June 15, 1927. She graduated from Taylor High School and worked as a bookkeeper. Nona married Marshall James Nehring of Whitehall, February 8, 1947. Soon after, they bought a farm near Centerville, and began their dairy farming life together, and raised four children.

Nona was active within the churches they were members of — Zion and Mt. Calvary Lutheran. She was also a 4-H leader for many years and was a past Treasurer for the Town of Trempealeau. Nona was a skilled and hard working housewife — cooking, cleaning, gardening, sewing, in addition to helping with the farm chores. It was challenging to get away from the farm for long, but Nona and Marshall liked to travel. In the early years, by car camping and later in small RVs. She visited 49 states as well as Canada, Mexico and Germany. When the children were grown, she became a prolific quilter. Playing cards with friends, solving jigsaw puzzles, watching high school basketball tournaments, bird watching and baking were favorite pastimes. Many will remember her ginger cookies, and the Sunday night popcorn tradition that she passed down from her aunt.

Memorials can be given to Zion Lutheran Church or a charity of your choice.