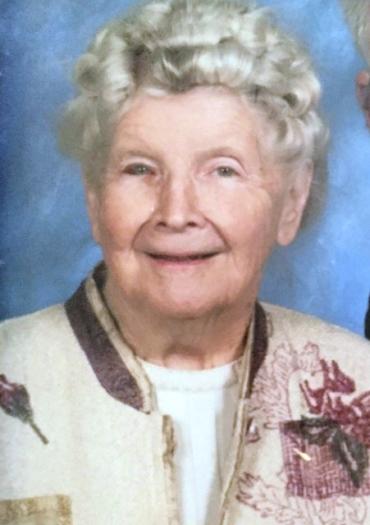 Norma was born November 12, 1924, on a dairy farm in Trempealeau, to the late Leslie and Margaret (Herman) Lakey. Norma’s family moved to Michigan City, IN, in the 1930s where she met Wilbur “Webb” Scrivnor. They were married January 28, 1945, and remained married for 72 years before his passing, September 21, 2017.

When Webb went to school to become a professor of music, Norma supported him by working as a bookkeeper. She worked at the Muskegon Bank & Trust in Muskegon, MI, for 11 years. During Webb’s first teaching position, she was then able to complete her own bachelor’s degree in Religious Education at Pfeiffer College (now University) in North Carolina. From there, Norma and Webb moved to Seymour, IN, then Muskegon, MI, and finally settled in Grand Haven, MI, where they lived for 51 years in their log home on the Grand River. At each stop in their adventure, Norma worked at the local Methodist Church, preparing the Sunday bulletin and teaching Sunday school. When they moved to Grand Haven, the Church of the Dunes became their permanent church home. Norma was the Director of Christian Education, President of the United Methodist Women, and a member of many other committees of the Church. She and Webb were also members of many other committees of the greater Methodist Church in Michigan. Norma helped Webb organize the European tours of the Grand Haven High School choirs and assisted with the high school musicals. She later served as the President of the “Tuesday Musicale,” which raised money for scholarships for high school musicians and the Peninsula Poets. She sewed concert attire, typed programs, raised money, wiped tears and calmed the nerves of many high school singers. In her spare time, Norma enjoyed knitting and doing cross-stitch. Her friends and family were the recipients of her beautiful creations, and she will be remembered and missed by many.