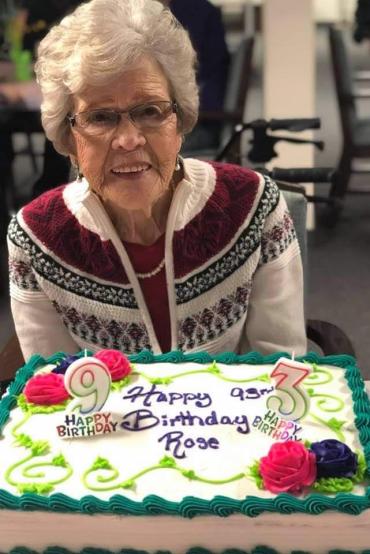 Rose was born March 7, 1926, in Esofea, WI, to Bernard and Agnes (Thompson) Ostrem, the middle child of fifteen children.

Rose was her Dad’s “Number 1” hired man on the farm until she moved to Beloit at the age of 18 where she worked at Fairbanks Morris. Rose met Curtis Smith on a dance floor and they later married, July 19, 1947. Curtis preceded Rose in death on July 16, 1977. From then on, Rose dedicated her life to her family and friends, making sure she was available for any event they were a part of. Her many hobbies included bowling, (especially going to the state bowling tournament with her sisters), rosemaling, teaching many people the correct way to make lefse (not too dark) and gardening. Rose was very strong in her Norwegian heritage and devout in her faith.

In addition to her parents and husband, Rose was preceded in death by seven brothers: Curtis, Kenneth, Gordon, Keith, Arden and two in infancy; and six sisters: Hazel, Inez, Opal, Beatrice, Olene and Barbara.

Funeral services were held Saturday, March 20, 2021, at 1:00 p.m., at Our Saviour’s Lutheran Church in Whitehall. Pastor Peter Jonas officiated. Visitation was one hour prior to the service.