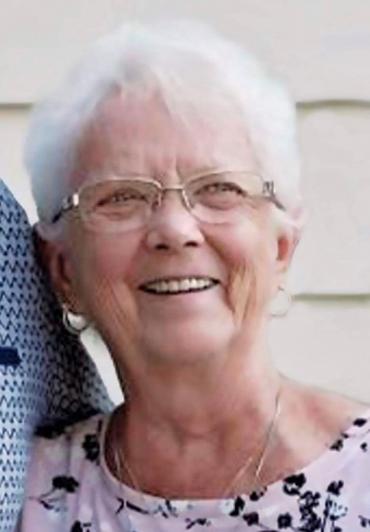 Shelba McBride, 83, of Ettrick passed away August 20, 2021, at Gundersen Medical Center, after a courageous two-month battle with HLH disease.

She was born June 11, 1938, at “the foot of Farnam street” in La Crosse, to Oliver & Opal (Mills) Dammon. After attending Central High School, she was a nursing assistant at St. Francis Medical Center in La Crosse. Following that, she had several jobs but found the job she loved at Marinuka Manor in Galesville. She worked there for 37 years before she retired at the age of 71.

On May 23, 1959, Shelba married Darryl Lee McBride. They celebrated their 55th wedding anniversary prior to Darryl’s passing in 2014.

Shelba started golfing when she was in her 40s, and became an avid golfer. She won the Ettrick Ladies Club Championship 13 times. She also loved spending time with her children, grandchildren and especially her great-grandchildren. Shelba loved spending time with her Friday night crew: Maggie Maynard, Sheri Truax, Betty Ofsdahl, and Carl and Vicki Aubert. She loved to cross-stitch, and she made many beautiful pieces for friends and family, including a cross-stitch birth announcement for her grandchildren, and her great-grandchildren who are now ages 1 to 23.

She was preceded in death by her husband, Darryl McBride; her parents; her brother, Jack Dammon; her sister, Maxine Nelson; brother-in-law, Donald McBride; and Robert McBride; a sister-in-law, Barbara Knepper.

Dickinson Family Funeral Home and Crematory is assisting the family with arrangements.

Memorials may be given to the Gundersen Medical Foundation, 1836 South Ave., La Crosse, WI. 54601

Online condolences may be sent to the family at www.dickinsonfuneralhomes.com.