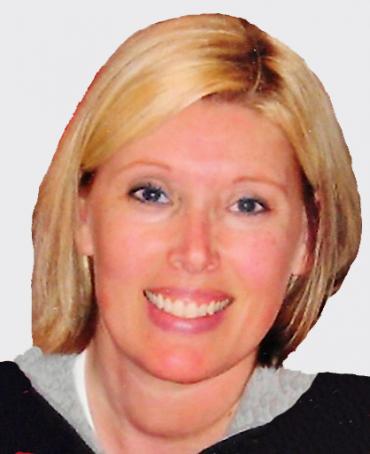 T’s love of volleyball started in middle school in Eleva-Strum. She continued to play in high school in Mondovi. During that time, she became a primary caregiver to her baby brother, Kevin, who sparked another passion in her life, taking care of children. After graduating from Mondovi, she enrolled at CVTC in Eau Claire for Child Care Services. For 20 years, she worked in many centers, as a nanny in Santa Cruz, CA, and as a teacher/director at Creative Beginnings Child Care in Strum.

She continued to play volleyball in women’s and mixed leagues indoor and outdoor. In December 1999, “T” took a break from teaching and started working at Fashion Bug in Oakwood Mall. When she returned to teaching the next month, she continued at the Bug part-time until 2007. In 2008, she and Matt moved to Independence, where she started working at the funeral home. She completed her Wisconsin Funeral Director’s Apprentice Certification, November 10, 2018. “T” volunteered as a high school volleyball coach for nine years at IHS. She loved watching UW-Madison Badger Volleyball on television and in person. Throughout her working years, she made many new friends that she is incredibly grateful for. “T” also enjoyed attending Independence School District sporting events.

She loved her time with Matt — traveling in the car, singing along to the radio and stopping at antique stores. She also loved her time at home, watching movies or TV and snuggling with their cats.

Her love of cats started as a child and literally grew as she got older. She and her dad spent countless hours live-trapping local feral cats. A lot were relocated to a farm and many stayed at their houses.

“T” also loved music, especially rock and metal. She liked to go to Shake, Rattle and Roll with her family and their friends in Eau Claire. When that festival ended and transitioned to Shake, Rattle and Rock in Cadott, she was there. She went the first two years general admission and after that had her same VIP seat ever since. Again, forming new and lasting friendships along the way.

A Mass of Christian Burial was held Monday, March 7, 2022, at 10:30 a.m., at Ss. Peter and Paul Catholic Church, Independence. Rev. George Thayilkuzhitottu officiated. Burial was in the church cemetery.

A special thank you to Suzanne Roskos and St. Croix Hospice for their care in Teresa’s days.