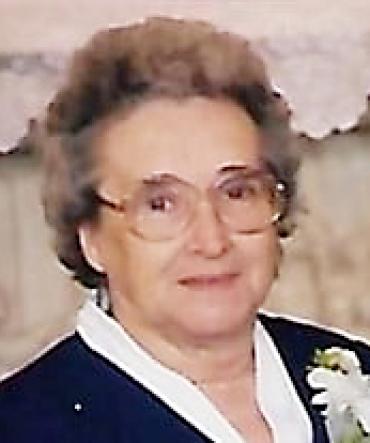 Vivian was born November 18, 1928, to Joseph and Helen (Schneider) Mahutga. On May 19, 1947, she married Robert Lisowski. They were blessed with four sons: David, James, Kevin and Terry, and three daughters: Catherine, Jean and Karen. Vivian and Robert were blessed with 66 years of marriage until he preceded her in death, December 27, 2013.

Vivian was a strong woman in so many ways. Her faith was strong, and never missed Mass, even if she had to watch it on television. She knew that God was her strength which helped her through a lot of difficult times. She never gave up or waivered in her faith. Vivian worked alongside Robert on the family farm while raising their children. She always made sure everyone was well fed with her fabulous meals, fresh bread and other baked goodies. She always had a large garden that gave us those fresh canned goods during the rest of the year. She filled her free time sewing and patching, playing cards and Rumikub, and watching her favorite television shows.

Through the years, Vivian made hundreds of rugs, each made from small polyester squares, which she gave away and never wanted a penny for. Often times, a stranger would walk away with a rug that they admired, so she gave it to them to have. If you were fortunate to receive one, you have a real treasure! When she played cards, she always seemed to win, but if we won, you were always called a “cheater” as she folded her arms and give you “the look”! If she was taking too long on a play and we gave her a hint to hurry up, she would say, “hold your shorts!” Vivian loved to play games because she said, “It keeps the cobwebs out of the brain.” Even though she never had a driver’s license, she always told you how to drive and where to go! Vivian also had a memory that was a true gift from God. She would rattle off birthdays, anniversaries, deaths, ages, and details about anything you wanted to know, as she had it all stored in her memory. She loved company, especially when the grandchildren and great-grandchildren came. She would find a treat or play games with them and ask them to come back again sometime. She welcomed folks of all kinds, and was always ready for deer season when the hunters came and she had to write down who shot what. It was always a good piece of news to share. Vivian was proud of her flower gardens and the vast variety of birds she made sure were fed to her specifications. If the feed wasn’t in the right spot, you better go fix it!

Talbot Family Funeral Homes, Alma Chapel, assisted the family with arrangements. Condolences and memories may be shared with the family at http://www.talbotfuneralhomes.com.

In lieu of flowers, memorials can be made to St. Jude’s Children’s Hospital. Vivian was always an advocate of helping the needy, especially when there were children and animals involved.