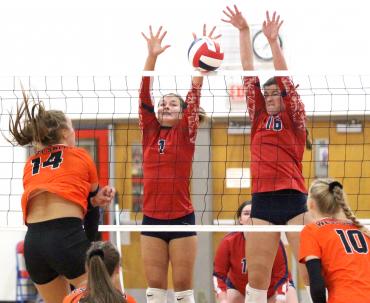 There has been a noticeable shift in the body language and mindset for the Gale-Ettrick-Trempealeau High School volleyball team this fall.

After sticking with a strong Coulee Conference foe in West Salem last Tuesday before dismantling another in Viroqua later in the week, the 2022 squad is raising expectations every day after a down 2021 season.

The Red Hawks improved to 3-2 in conference play with last week’s split and currently sit in third place in the Coulee after finishing last a year ago. They have already surpassed their conference and total wins from last year (two).

Coach Jess Weiler said her team has higher aspirations, which continue with Coulee matches against Arcadia and conference leading Westby this week.

“What more could you ask for? I think they’re realizing based on not having successful previous seasons that that doesn’t have to dictate the success of this season,” Weiler said. “Realizing that they can compete with top teams in the conference has given them I think that mental boost that they’re capable of more than they maybe set out for at the beginning of the season.”

“The top of the conference is what their eyes are on, and as long as we keep working hard nothing can stop us.”

The Red Hawks opened both the first and second sets last Tuesday with early leads, but the sets ended in very different ways against one of the teams G-E-T is chasing in the conference.

“We’ve got to start fast, we’ve got to get ahead, just because sometimes we do get into our heads a little bit. So the more that we can get out and get going right away it definitely plays to our strengths,” Weiler said.

West Salem responded to an early deficit with a resounding win in set one before the Red Hawks capitalized in the second set to tie the match. A sneaky set from senior Kayla Schultz won the second set, in which G-E-T utilized an up-tempo attack and returned the ball quickly.

“They picked us apart tonight defensively by finding the holes and their hitters did a nice job of attacking,” Weiler said. “So I think we were able to just kind of play our game more in the second versus doing what they wanted.”

West Salem (4-1 Coulee) took hold of the game and slowed it down again in the last two sets. Serving became an issue because the Red Hawks struggled to string together multiple strong serves on offense. West Salem, though, continued to find their attacking spots.

Schultz paced G-E-T in assists with 14, and Elyse Schoonover had 15 kills to lead all players. Jordan Stanislowski had 10 digs, while Tatum Johnson contributed a pair of blocks.

The Red Hawks responded to the loss appropriately on Thursday, overcoming an emotional loss in the opening set of a home match against Viroqua to win three straight sets and gather their third conference win of the year.

Viroqua won on a tiebreaker in set one before G-E-T narrowly beat the Blackhawks in the second set. The hosts had their way for the rest of the match.

Schoonover again led the way in kills for the hosts with 14, while Stanislowski helped with 13 and Johnson added eight. Kaylee Hauge finished with a match-high 21 assists, and Schultz added 16.

Cadence Simmons and Schultz each had four aces, and Johnson contributed a handful of blocks.