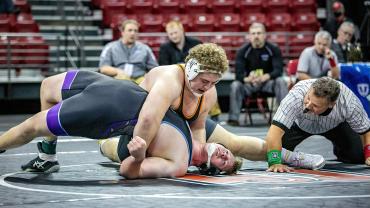 Whitehall’s Wylie Dunn worked to secure a pin against Caleb Marchwick of Ithaca/Weston during their fifth-place match at the state tournament in Madison on Saturday.       (Photograph by Mike Poulos) 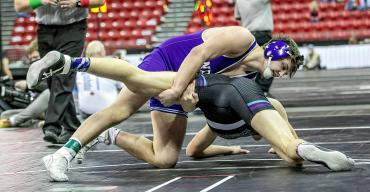 Gavin Bragger of Independence/Gilmanton tried to turn Ithaca/Weston’s Jacob Manning during their match at the state tournament in Madison on Thursday.    (Photograph by Mike Poulos)

Dunn came into the tournament as a first seed after winning the sectional. His first match came against a wrestler he defeated to win the sectional title, Mike Nelson (37-3) of Unity.

Fortunes were reversed at the state tournament. Dunn pinned Nelson in the sectional, but at the state tournament Nelson took an early lead with a takedown in the first period. Dunn scored an escape, but Nelson matched that escape in the second period before getting the Whitehall senior to his back and pinning him in 4:24. Nelson went on to take second.

While his dreams of winning a state championship were gone, Dunn rebounded to still earn a spot on the podium. That started by pinning Darren Wagner (33-17) of Reedsville. The wrestlers were scoreless entering the third period when Dunn scored a reversal and turned Wagner to his back for the pin in 3:24.

That set Dunn up with a rematch from the 2021 state tournament when he defeated Diego Morales (48-5) of Cedar Grove-Belgium. Dunn scored an escape to take a 3-2 lead with 28 seconds left in the match, but Morales took him down immediately after to get a 4-3 win. Morales went on to take fourth.

Dunn’s high school career ended with a win as he escaped from the bottom to start the second period against Caleb Marchwick (36-10) of Ithaca/Weston before taking him down and pinning him in 2:28.

The Whitehall wrestlers finished his senior season with a record of 35-5. He won more than 100 matches in his career and placed in the state tournament twice, taking fourth last year.

Dunn was one of three area wrestlers competing in Division Three, the other two both lost in the first round.

Gavin Bragger (182, 33-6) of Independence/Gilmanton got into trouble early against Jacob Manning (49-6) of Ithaca/Weston. Manning got a takedown 40 seconds into the match and turned Bragger to his back. Bragger escaped the pin, but faced a 5-0 deficit entering the second period. Manning added an escape and another takedown to go ahead 8-0 before pinning Bragger in 3:35. Manning went on to finish fourth in the tournament.

Blair-Taylor’s Jackson Shramek (170, 32-12) faced a familiar opponent in Cochrane-Fountain City’s Sam Schutz (22-7). The two were close early as Schutz scored an escape to take a 1-0 lead into the third period. The C-FC wrestlers took Shramek down about 50 seconds into the final frame before turning him to his back for the pin in 4:51.

Schutz went on to lose his next two matches and did not place.