‘We’ve got to make plays’: Red Hawk baseball sloppy in loss to Tomah 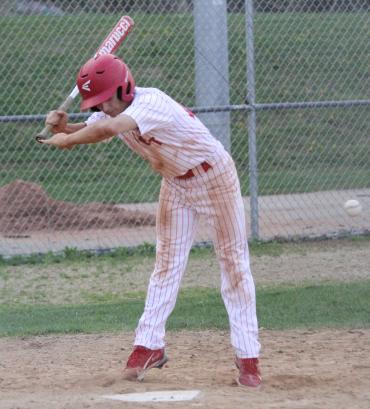 Zach Grams jumped away from an inside pitch in a loss to Tomah at G-E-T High School last Wednesday. Grams was the only Red Hawk with multiple hits.            (Times photograph by Benjamin Pierce)

If the Gale-Ettrick-Trempealeau High School baseball team wanted at least a share of a Coulee Conference title this week, they needed to avoid a performance similar to the one they showed last Wednesday at home against Tomah.

A win on Monday over the visiting Panthers would seal a first place finish for G-E-T, which struggled in last Wednesday’s 6-2 loss—one that ended a six-game win streak.

“We’ve got to make plays,” coach Scott Hovell told the Times after Wednesday’s loss. “We just didn’t come to play today and we weren’t locked in from the first pitch.”

The loss followed wins over Arcadia and De Soto. The Red Hawks (12-6 overall, 8-3 Coulee Conference) played in a tournament on Saturday, too.

Neither team scored on Wednesday until the top of the fourth inning, when multiple errors gave the visiting Timberwolves a chance to open the scoring with four runs. A pair of singles got Tomah on base, and two runs were scored on a fielding error at third base after a walk. Another single scored the third run after an error pushed runners on the base paths, and a third error brought in the fourth run of the game.

The Red Hawks struggled on offense, too, which put too much pressure on the defense to make every play, Hovell said. Fly outs, strikeouts and weak swings held G-E-T to five hits.

That creates a dangerous combination, Hovell feels, adding that it seemed in the days surrounding the game that his group was unprepared and lacked focus.

“I always feel like we’ve got a chance to win. We’ve shown that we can put up big numbers at any time, but today just had a different feel to it,” he said.

In the bottom of the sixth inning G-E-T showed life, scoring twice to cut the visitors’ lead in half before giving the runs back in the next half inning. Brenden Brady brought in one run on a fielder’s choice, and Warren Stoner brought in the second on a single in the next at-bat.

Zach Grams was the lone bright spot for the Red Hawks, finishing three-for-four at the plate.

“He’s always here to play 110 percent and never takes a play off,” Hovell said of Grams. “He’s always sprinting, always looking to take an extra base and it energizes an entire team when you see a guy doing those types of things. … The fact that he’s swinging a decent bat lately is huge for us.”

Accountability for G-E-T is key, the Red Hawks’ coach said Wednesday. Before the Panthers visited on Monday with a conference title on the line for the hosts, Hovell said his team needed to get back to what has brought them success this season—the finer points of baseball.

“They understand that if you’re not going to come focused and ready, we’re going to lose. We’re not a team that’s going to come out here and hit doubles and hit bombs and throw 90 and strikeout a dozen guys a game,” Hovell said. “We have to do the little things correctly in order for us to win baseball games, and if we’re not focused and we don’t do the little things correctly, it shows up in the box score.”

A dramatic finish led G-E-T past the Raiders last Monday.

The Raiders held a 3-2 lead for most of the Coulee Conference game in Arcadia before G-E-T scored four runs in the top of the seventh inning to steal a win. The Red Hawks out-hit Arcadia 13 to six but also had six errors on defense.

Four players had at least two hits for G-E-T, while Collin Handke and Cole Williams brought in two runs apiece. Handke had a triple, and Williams and Ethan Stoner hit doubles. Carson Martin had two hits for the Raiders, who got seven strikeouts in a joint pitching effort from Connor Weltzien and Cam Boland.

Handke pitched for G-E-T, striking out 10 and walking one while allowing six hits.

De Soto was held to two hits while the host Red Hawks racked up nine in a nonconference win on Tuesday.

Jack Beedle got the start for G-E-T, allowing two hits in four innings before Owen Eddy finished the game with a pair of strikeouts to pick up the win in the fifth inning.

Grams went three-for-three with a pair of RBI on offense, and Stoner had a double.

Eddy drove in four runs in another big day for the Red Hawk offense on Saturday, and G-E-T breezed by a Dairyland Conference opponent in tournament play.

The Red Hawks scored 1o runs before the Pirates got on the board in the five-inning win. Eddy finished three-for-four with a homerun and a double, while Grams added a pair of hits.

The Blackhawks (12-7, 7-3 CC) were the ones who got off on the right foot in game two of a tournament on Saturday as they continue to chase G-E-T from the second spot in the Coulee standings.

Five runs in the opening at-bat set the tone, and G-E-T didn’t get on the scoreboard until the fifth inning. Grams kept his contributions going with a pair of hits while three Red Hawk pitchers combined to allow nine hits and as many earned runs to go with a trio of strikeouts and five walks.