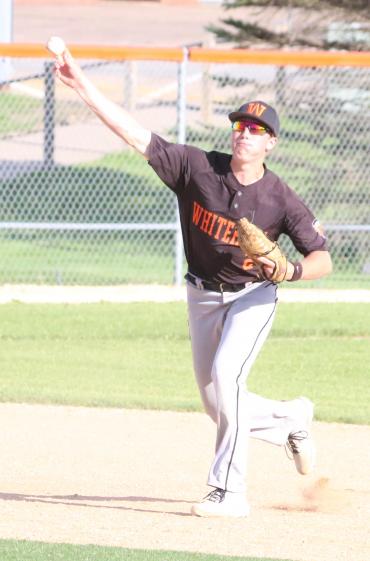 Whitehall’s Devon McCune threw to first for an out during their game against Osseo-Fairchild last week Tuesday.                        (Times photograph by Andrew Dannehy)

After staving off elimination once, the Whitehall baseball team’s season came to an end last week.

The team was looking at the end at home last week Tuesday, facing a 3-1 deficit in the bottom of the seventh against Osseo-Fairchild, but three runs in the final at-bat gave the Whitehall team a walk-off win. But, the season lasted just one more day. The Norse committed multiple errors and failed to get anything going offensively against La Crosse Aquinas in the regional final. Aquinas is the second-ranked team in Division Three and entered this week with a 23-3 record on the season.

Prior to running into one of the top teams in the state, the Norse were on fire, winning eight straight as they finished the season with a 15-7 record and tied — with Eleva-Strum — for second place in the Dairyland Conference at 13-5.

With the season on the line, the Norse scored three in the bottom of the seventh to walk off with a win.

The Thunder tied the game with a run in the sixth and then scored two in the top of the seventh — including one on a bunt single as they took a 3-1 lead and, seemingly, control of the game.

Whitehall was in business early, however, as Bryce Schorbahn led off the bottom of the seventh with a walk then Brock Sluga drew a base on balls. After a strikeout, Brayden Lisowski walked to load the bases with one out.

Luke Beighley then hit into an error to bring one run home. After a fly out for the second out of the inning, Aidan Sonsalla earned a walk to score Sluga and tie the game. With two strikes and the tying run 90 feet away, Devon McCune hit the ball to right field, but the O-F outfielder wasn’t able to get control of the ball and Lisowski came home to score the winning run.

The game had been tight as Whitehall Lisowski held the Thunder to just one hit through five innings. Whitehall took the lead in the second as Beighley hit a one-out double and scored on an error with two outs.

Whitehall missed several chances throughout the game. They had the bases loaded in the first and second innings, but managed just one run. They had runners on second and third in the third, but didn’t score. Loaded the bases again in the fourth, but, again, came up empty.

The Thunder finally got through on Lisowski in the sixth as a walk was followed by a wild pitch and then a single to tie the game.

A single and a walk put two on with one out for the Thunder in the seventh before an attempted suicide squeeze turned into a bunt single and brought the go-ahead run home. A double steal plated another run as the Thunder took a 3-1 lead.

Whitehall had sent just three batters to the plate in the fifth and sixth innings, but they put the ball in play in the seventh as they came back for the win.

McCune ended up as the winning pitcher after he replaced Lisowski to get the last two outs in the seventh. Lisowski had allowed three hits and three walks while striking out seven.

McCune also led the Norse with two hits in five at-bats, the team had six as a team. Part of the reason for the relatively modest hit total was because the Norse drew 10 walks in the game, Sluga and Lisowski both walked three times.

Spencer Osmonson took the los for the Thunder, pitching the final three innings. He didn’t allow a hit, but walked five batters and struck out two. None of the three runs he allowed were earned. Ashton Olive pitched the first four innings.

The Norse were within striking distance until the Blugolds scored four runs in the last two innings.

McCune had, for the most part, kept Aquinas in check early in the game. The Blugolds had a single and a double in consecutive at-bats to take a 1-0 lead. Mistakes led to more runs in the second, third and fourth innings.

Aquians added another in the fifth after a leadoff single and two sacrifices, the second of which brought the runner home. They broke the game open in the sixth as the first batter homered before two walks were followed by a sacrifice and a single.

The Norse also struggled at the plate, as they managed just two hits in the game. Whitehall had a runner on in the second when Brock Sluga walked, but two fly outs ended that inning.

Aidan Sonsalla got Whitehall’s first hit with two outs in the third, but the next eight Whitehall batters were retired until Sonsalla reached again, this time on a walk in the sixth.

Whitehall’s best shot at scoring came in the seventh when Sluga walked with one out and Skoyen singled. Mike Spare then hit into a fielder’s choice before a strikeout ended the game.

Only two of the five runs McCune allowed were earned as he struck out six in five innings with eight hits and two walks. Spare pitched the sixth, walking two with two hits and two strikeouts.

Whitehall had two hits and three walks, but struck out 10 times.