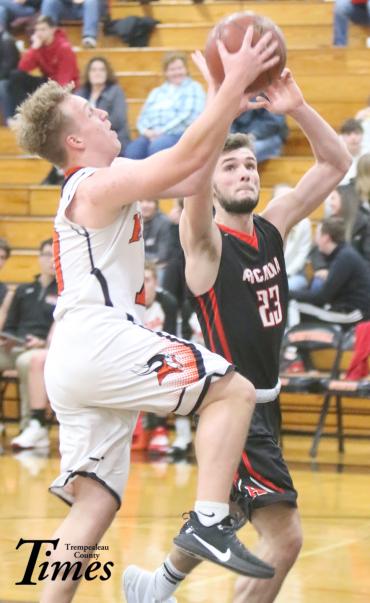 James Breska of Whitehall went up for a layup as Arcadia’s Michael Schweisthal attempted to block his shot during their game last week Monday. (Times photograph by Andrew Dannehy)

The week looked like it was going to get off to a good start for the Arcadia boys basketball team, but they lost an early lead and ended up with two losses.

The Raiders were in complete control leading Whitehall 17-4, but the Norse chipped away and tied the game by halftime before winning 61-56 (see story elsewhere in Sports) last week Monday. On Tuesday, the Raiders fell to Viroqua 53-40 after faltering in the second half.

Arcadia was in action again this week Tuesday when they took their 1-15 overall record to La Crosse Aquinas. On Thursday, the Raiders will try for their first Coulee Conference win at home against Black River Falls before hosting West Salem this coming Monday and Gale-Ettrick-Trempealeau on Thursday.

Viroqua’s offense got going better and faster and a close game turned into a double-digit win.

Arcadia’s defense kept them in the game for the first half as they trailed 19-16 at halftime, but Viroqua’s Clayton Slack and Jacob Lotz got going in the second half. Slack had two baskets and five free throws as he scored 10 in the second frame while Lotz was able to get inside for four baskets and knocked in a three pointer as part of a 12-point second half.

Missed free throws helped keep the Raiders in the game as Arcadia put up 24 points in the second half, but the Blackhawks were still able to come away with a convincing win.

Lotz scored 14 points to lead Viroqua, one more than Slack while Dawson Swenson had 10.

Chandler Sonsalla made two three pointers in the second half as he tied with Ethan Weltzien for a team-high 11 points. Michael Schweisthal finished with eight, Lizandro Aguilar scored five, Trev Bjorge had four and Kaden Updike finished with one.