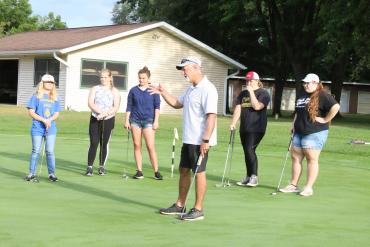 Coach Mike Sobotta addressed his team during its first practice at the Arcadia golf course on Monday morning.            (Times photograph by Andrew Dannehy)

While the only area golfer to qualify for the 2019 Wisconsin Interscholastic Athletic Association State Championships graduated, both the Arcadia and Gale-Ettrick-Trempealeau teams are returning athletes who competed at last year’s sectional meet.

Arcadia’s Rylee Haines graduated after shooting a 95 at the Prarie du Chien sectional, which qualified her for the state meet, but the Raiders still expect to have a competitive squad.

Hallie Tulip finished just three strokes behind Haines at last year’s sectional and was the team’s second golfer all year as a sophomore. Joining her will be senior Zoie Pehler and sophomore Whitney Sonsalla as returning golfers from last year’s sectional. Ahnna Bautch also returns after getting varsity experience last year.

Emily Nelson shot a 102 at last year’s sectional to finish her sophomore campaign. Hayley Andersen, Hannah Trim and Tori Applin are all expected to return for their senior years.

Arcadia will be coached by longtime coach Mike Sobotta once again this year while G-E-T will be led by first-year coach and former player, Bailey Schmidt.