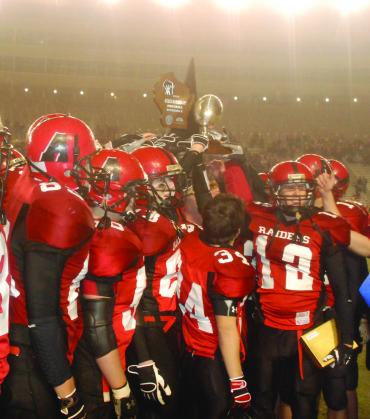 The Arcadia football team was the last Times'-area team to compete in the WIAA State Championship game. The Raiders won't be playing this fall, however, as the Coulee Conference teams decided to push football off until the spring.

Announcements from the Dairyland and Coulee Conferences this past week indicate both will pursue fall sports in the coming weeks, with the exception of football in the Coulee.

The Dairyland issued a release on behalf of all of their member schools saying football, volleyball and cross country will go on, while Arcadia and Gale-Ettrick-Trempealeau both made individual statements saying their fall sports except for football will be conducted in the fall.

Start dates for the Dairyland listed in their release included first practices on Aug. 17 for cross country, Sept. 7 for volleyball and Sept. 14 for football, with competitions potentially as early as this week for cross country, a Sept. 12 scrimmage for volleyball and a Sept. 25 scrimmage for football. Schedules for individual teams had not been released as of press time, but the release specified that they will adhere to a conference-only schedule across the three sports. Conference standings and championships are also suspended in the Dairyland for 2020, due to the uncertainty over the number of games each team may play.

In their individual release, Arcadia said their district has tentative schedules in place for girl’s golf as well as girls and boys cross country after each team began practices on Aug. 17. Boys soccer and girls volleyball are scheduled to begin on Sept. 8, with schedules to be finalized. Soccer however may be moved to spring if the team cannot fill an adequate schedule to justify a fall season.

Arcadia and G-E-T announced they would move football to the modified spring offering provided by the Wisconsin Interscholastic Athletic Association, which begins with practices on March 8.

While additional details for the Coulee Conference were not made available by press time on Monday, the Dairyland released several conference-wide measures concerning fan attendance among other concerns.

Each player in a given Dairyland athletic event will be provided with four tickets that are non-transferable to minimize fan attendance. Those tickets will also feature a reminder that face masks will be required of all indoor sport attendees, as well as outdoor attendees when social distancing is not possible. Dairyland schools will also all make efforts to live-stream games, and the gate fee for fall sports has been eliminated to maintain social distancing. No concessions will be made available as well.

The Dairyland release went on to say that additional information on protocols for athletes or entire teams sitting out of competition will be released as event dates get closer.