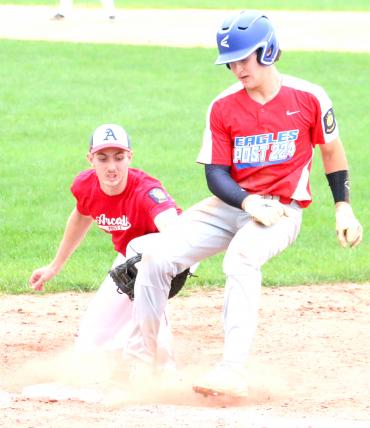 Vince Braun of Arcadia Post 17 applied a tag on a pickoff attempt during their game against Alma/Pepin last week Tuesday.            (Times photograph by Andrew Dannehy)

The Wisconsin American Legion Class AA regional tournament got off to a good start for Arcadia in River Falls last week, but the team lost its next two games.

Arcadia finished the regular season with a 5-4 win over Alma/Pepin on Tuesday. After winning five of their last seven games in the regular season, Arcadia opened tournament play with a 5-2 win over New Richmond on Friday. That put them in the next round against the host team, but Arcadia fell 1-0 in eight innings. Post 17’s season came to an end in the double-elimination tournament on Sunday with a 7-3 loss in a rematch with New Richmond.

Post 17 finished the season with an 8-7 record. They moved up from Class A to Class AA this year because the team included players from the Cochrane-Fountain City and Independence/Gilmanton programs.

Arcadia held off a late rally to win its final regular season game.

Alma/Pepin scored one run in the first inning and another in the third to take a 2-0 lead, but Arcadia scored the next five runs.

An RBI single by Vince Braun tied the game in the bottom of the third before Abe Henderson and Devon Baier had consecutive run-scoring hits in the fifth, putting Arcadia ahead 4-2. Logan Aspenson stole home for Arcadia’s final run.

The road team scored two in the top of the seventh, but Mavrick Drazkowski got out of the jam with a strikeout.

Arcadia had nine hits in the game as both Braun and Carson Pehler had two.

Drazkowski got the win, pitching the final five innings with seven strikeouts and four walks allowed.

Arcadia took the lead for good in the third inning then closed the door in the seventh.

New Richmond scored in the bottom of the fourth to cut the lead to one, but that’s as close as they’d get. Cam Boland hit an RBI double in the seventh and later scored himself on an error.

Boland and Pehler both had two hits for Arcadia as Pehler also added two RBIs.

Weltzien was the winning pitcher, tossing six innings with seven strikeouts, and six walks, while holding New Richmond to three hits. Prestin Scow pitched the seventh, striking out two in what would’ve been a perfect inning if not for an error.

Arcadia managed just two hits as they couldn’t push a run across the board.

With Pehler on the mound, Arcadia stuck with River Falls. The 2021 AHS graduate limited River Falls to four hits and one walk while striking out 10. But River Falls’ Cayden Mueller was carving up Arcadia batters with 12 strikeouts and one walk.

The teams were scoreless through seven innings, but River Falls broke through in the eighth as a leadoff walk came around to score on a one-out double.

Arcadia got a runner on in the bottom of the eighth as Ted Teske reached on an error with two outs, but a strikeout ended the game.

Arcadia scored first, but they weren’t able to keep New Richmond in check in the rematch.

Abe Henderson and Teske both had RBIs in the second inning to put Arcadia ahead 2-0, but New Richmond responded with one run in the second, another to tie the game in the third and two to take the lead in the fourth.

Arcadia got back within one with a run in the sixth, but New Richmond came back with three in the bottom half of the inning to put the game away.

Pehler had two of Arcadia’s seven hits while Henderson, Teske and Caleb Pronschinske all had RBIs.

Scow took the loss, allowing 12 hits and one walk while striking out two in 5.2 innings.