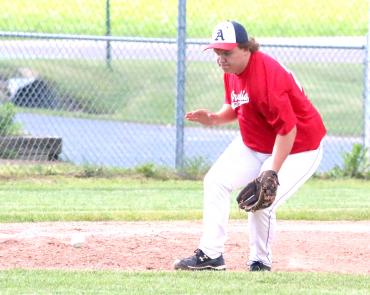 Holmen put on a show offensively and took advantage of several Arcadia mistakes as they scored 16 runs in five innings.

Three runs in the first inning gave Holmen the lead, but they kept piling on before going up 16-0. Arcadia Post 17 scored two in the bottom of the fifth, but the game ended by the mercy rule.

The loss put Arcadia at 0-3 on the season before playing at Onalaska on Monday of this week and a home doubleheader against Sparta on Thursday. On Saturday, they’re slated to play a tournament in Whitehall, taking on the Whitehall and Osseo posts.

Arcadia got off to a decent start, the first batter singled but was picked off of first base. Connor Weltzien struck out the second to get two outs with no runners on. Two walks and two singles followed and Holmen went ahead 3-0.

Holmen added another run in the second, three in the third, five in the fourth and four in the fifth to go ahead 16-0.

Post 17 got on the board in the fifth when Carson Martin tripled in a run. Austin Becker then singled Martin home, but those are the only hits Arcadia could muster.