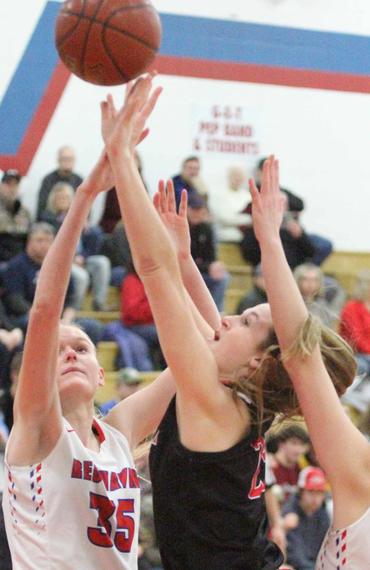 Linzy Sendelbach of Arcadia fired a layup over G-E-T defender Rachel Amoth during the Raiders' 70-30 win over G-E-T last Tuesday.

The Arcadia girls basketball team asserted their dominance in the Coulee Conference with a runaway win over Gale-Ettrick-Trempealeau to improve to 8-0 in conference play last Tuesday.

The Raiders frontcourt duo of Linzy Sendelbach and Ellie Hoesley wreaked havoc on the Red Hawk defense throughout the game, and Sendelbach reached a career milestone of 1,000 points as well in the win. G-E-T fell to 8-8 overall, as well as 4-4 in the Coulee with the loss. Arcadia also played Onalaska to round out their week (see story elsewhere in Sports). Arcadia 70 G-E-T 30 Early backcourt pressure from the Raiders forced the Red Hawks into some costly turnovers as G-E-T fell behind quickly at home against Arcadia. G-E-T head coach Louis Hurd took responsibility for several of the preliminary giveaways that amounted to 25 by the end of the game. "We talked about taking care of the ball, we talked about that they were gonna come out aggressive. I gotta be better at game-opening stuff. We have struggled out of the gate, and that has to be on me," Hurd said. Steals by Chloe Halverson and Hoesley contributed to an 10-0 start for the Raiders, with Halverson finishing for seven of those first 10 points. A layup by Rachel Amoth of G-E-T for their first points to break the run would also be the only time the Red Hawks would be within single digits the rest of the game. The Red Hawks had little answer defensively for Hoesley and Sendelbach, who combined for 25 points of Arcadia's 35-18 lead at the half.

"It's always tough when they get into spots on the floor where they can score because it's tough to help, because of their outside shooting," Hurd said. "We brought someone in to help off a non-shooter in the second half, and I think that worked to slow them down, but I think at that point it was kind of out of hand." A 9-0 run to start the second half for the Raiders put the game essentially out of reach for the Red Hawks. Sendelbach capped a 15-point night with a layup just past four minutes into the half to eclipse 1,000 points for her career. Hoesley led the Raiders with 18 points, while Halverson added 13 and Hannah Suchla, Breah Golden, Hailey Sonsalla and Mercedes Romo each had six. Arcadia as a team limited their turnovers to nine and shot 49.1 percent from the field in an efficient night across several categories. They also tallied 20 team steals, led by Halvorsen and Sendelbach with four each, and Golden adding three. Cassy Schmitz and Genna O'Neill led the Red Hawks with seven points each, while Kayli Bratberg had five and Amoth had four and 13 rebounds. G-E-T's 30 were rounded out by two each from Lindsey Lettner, Aliva Beaman and Alexa Hammond, as well as a free throw from Anna Puent. G-E-T struggled from the field with a 26.3 percent clip.

"There was a stretch there where we had a lot of open looks, and against a team like that you have to hit'em because you have to keep pace, because they have a lot of weapons," Hurd said. "But we'll look at the film, I thought we did some good things on offense and defense."