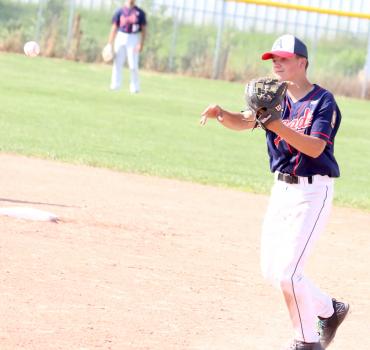 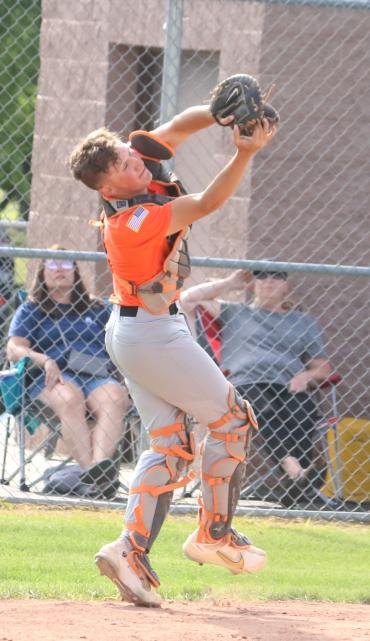 Whitehall’s Aidan Sonsalla secured a pop-up in his glove during their game against Arcadia last Thursday.             (Times photograph by Andrew Dannehy)

Arcadia scored seven runs in the first inning of a 10-7 win to start a doubleheader against Whitehall on Thursday. They hammered out 16 more runs in a 12-run win in the second game to earn the sweep. The winning continued with a 4-2 victory in West Salem on Friday before they dropped the second game 3-2.

After losing its first four games of the season, Arcadia entered this week with a 6-6 record before playing Pepin/Alma on Tuesday.

Arcadia opens Class AA River Falls regional play at 2:30 p.m. Friday with a game against New Richmond. Should they win, they’ll play again at 2:30 p.m. on Saturday. With a loss, they’d play at noon on Saturday. Games continue throughout the weekend in the double-elimination tournament with a championship game tentatively set for 10 a.m. on Sunday.

Whitehall struck first, but Arcadia exploded in the bottom of the first.

A Bryce Schorbahn RBI single put Whitehall in the lead in the top of the first, but Arcadia tied the game when its second batter, Connor Weltzien, doubled home Cam Boland. Vince Braun doubled Weltzien home before Abe Henderson and Prestin Scow had two-run singles as part of a seven-run inning.

Whitehall scored two runs in the top of the second, but Arcadia got both back in the bottom half on another two-run hit by Henderson.

Whitehall made the game interesting with three runs on two hits in the fourth to pull within two, but Henderson brought another Arcadia run home in the bottom half and that’s where the final stood.

Six different Whitehall players had one hit as Arcadia used five different pitchers in the game, none pitching more than two innings. Weltzien got the start and the win as he, Scow, Caden Weber, Henderson and Hunter Guenther combined to strike out nine with seven walks.

Henderson, who will be a sophomore at Cochrane-Fountain City, went four-for-four at the plate with five RBIs.

Like the first game, Arcadia’s offense got off to a fast start with 10 runs in the first inning then six more in the second das the game ended after two-and-a half.

Whitehall scored first again as Mason Pientok singled in Brayden Lisowski in the top of the first, but Arcadia wasted no time taking control.

Like in the first game, the second batter of the game tied it for Post 17 as Max Sobotta’s sacrifice bunt brought Boland home. Carson Martin then tripled and scored on an error to put Arcadia ahead.

After a couple of walks with the bases loaded, Boland singled in a run to make the score 5-1. A hit batter, a walk and two errors brought home five more runs as Arcadia took a 10-1 lead.

Arcadia scored six more in the second to go ahead 16-1 before Whitehall scored three, but the game ended after that final at-bat.

Sobotta got the win for Arcadia, pitching two innings with one hit and two walks allowed. Devin Baier pitched the third.

Arcadia had five hits, led by Martin who had two with five RBIs.

Two runs in the top of the eighth inning gave Arcadia the win.

The teams ended regulation tied 2-2 before Guenther doubled to lead off the top of the eighth for Arcadia. Caden Weber then singled to put two in position for Mavrick Drazkowski, who brought both home with a double.

West Salem went down in order in the bottom half of the inning.

Arcadia took the lead in the top of the first as Boland was hit by a pitch and Weltzien singled. Boland scored on a groundout by Martin and Weltzien came home on a sacrifice by Braun.

Guenther got the win, pitching the first seven innings with 12 strikeouts and no walks allowed. Weltzien picked up the save, pitching a perfect eighth inning.

Arcadia had 13 hits as Weber went four-for-four while Boland, Weltzien, Guenther and Drazkowski all had two. West Salem had nine hits in the game.

A run in the bottom of the fifth gave West Salem the walk-off win.

Arcadia took a 2-1 lead in the third when Martin singled Boland home. West Salem tied the game in the fourth then won it in the fifth.

Braun took the loss, taking over in the fourth inning after Weltzien pitched the first three. West Salem only managed four hits and two walks, while striking out four times, but they got timely hits.