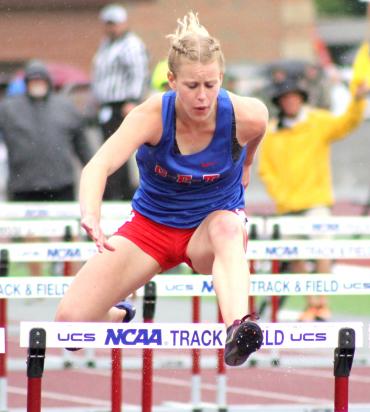 After falling during the 100 hurdles, Gale-Ettrick-Trempealeau’s Quinn Wenthe rebounded with a third-place finish in the 300 hurdles at the state track meet on Saturday.            (Times photograph by Benjamin Pierce) 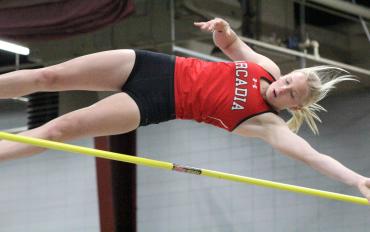 Arcadia’s Casidi Pehler cleared the bar during the state track meet on Saturday. The pole vault was moved indoors due to the weather.            (Times photograph by Benjamin Pierce) 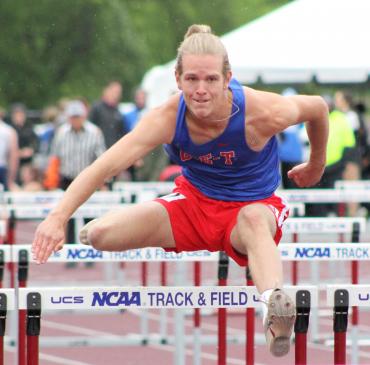 Will Thompson finished sixth for Gale-Ettrick-Trempealeau in the 110 hurdles at the state track meet on Saturday.             (Times photograph by Benjamin Pierce)

The audience at the University of Wisconsin-La Crosse’s Roger Harring Stadium let out a collective “ooh” noise just after Quinn Wenthe clipped a hurdle in the 110-meter finals and fell to her hands and knees during the Wisconsin Interscholastic Athletic Association State Track and Field Championships last Saturday.

She got a louder response by quickly getting to her feet and finishing the race in 10th place (21.09). But after crossing the finish line the senior had a bigger task at hand — get to the podium in the 300 hurdles and help the team’s 1,600 relay accomplish the same.

Wenthe did both, taking third in the 300 hurdles (46.56) and helping the Red Hawks take the final podium spot with a sixth place finish in the relay. They were two of four individual medals for Division 2 athletes in Trempealeau County, as Casidi Pehler of Arcadia took fourth in the pole vault and G-E-T senior Will Thompson took fifth in the 110 hurdles.

“You just have to let it go,” Wenthe said of staying focused after the 100 fall. “It’s not going to help you holding onto it, so you have to realize you can worry about it another time, be sad about it before, but then it’s time for the next race.”

In the 300 hurdles, Wenthe made up ground around the turn before passing multiple runners down the final 100-meter stretch. It was enough for the area’s best finish in third. And even though she wanted a championship, she was happy to end her career on the podium.

“Other than a couple hurdles it was a good race, so I can’t be too upset,” she said. “And my competitors were awesome, so they deserve it too.”

About a month ago, Casidi Pehler had a tough decision to make.

The Arcadia sophomore could keep trying to juggle playing softball — a sport that’s been a huge part of her life and included traveling ball — and competing in track and pole vault, or she could focus more of her time on one of the two sports.

It has since become her favorite event, and shortly after having a medal slipped onto her shoulders for a fourth place finish in the Division 2 pole vault on Saturday, Pehler said choosing track has helped her develop a deeper appreciation for the sport.

“Once the track season started I feel like it felt right,” Pehler said. “I just knew that I had goals that I wanted to achieve and knew I’d have to put my whole heart into track in order to get here.”

Pehler’s leap of 10 feet, nine inches was six inches shorter than the winning jump from Notre Dame Academy’s Anna Schueller. But after reaching the podium, Pehler has high aspirations for her future as a vaulter.

“Going into the season I had the idea that there might be a possibility but I didn’t have a feeling of ‘Oh yeah, I can make it to state.’ But then once I started improving and seeing what I can achieve and do and to be here now,” she said, “It’s amazing.”

Will Thompson’s goal heading into Saturday wasn’t about the podium as much as it was finishing his career with a race he was content with.

A fifth-place run in 15.70 seconds for the 10th seeded runner in the 110 hurdles was even better.

“I was just happy to make it here and just wanted to try my best. I wasn’t really expecting a whole lot and it’s not the best weather for it,” he said as rain fell.

When his name flashed onto the screen to earn him a top finish, Thompson couldn’t believe it.

Arcadia senior Ryan Sokup qualified for finals in both the open 100 and 200 races last weekend, finishing ninth in both with times of 11.69 and 23.14. Sokup was also part of the 800 relay with Joe Nelson, Landan Bremer and Joel Fernando that finished eighth (1:33.06).