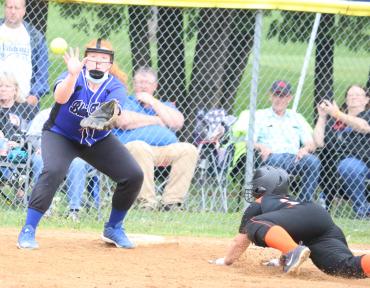 A walk-off win, a doubleheader sweep and the third no-hitter of the season were just the highlights of another perfect week for the Blair-Taylor softball team

The Wildcats survived a close game against Augusta last Tuesday, before Chloe Wagner no-hit Whitehall on Thursday and Greenwood also proved no match in a doubleheader sweep on Saturday.

B-T’s record now stands at 17-0, along with a 12-0 mark in the Dairyland Conference. Heading into this week, they were scheduled to travel to Cochrane-Fountain City on Monday before hitting the road again on Friday at Eleva-Strum.

The Wildcats had perhaps the closest brush with defeat this season last Tuesday, as they had to come back from a one-run deficit in extra innings to keep their perfect record alive.

Both teams scored a run in the fourth on fielder’s choice plays, leading to a 1-1 score that held through the end of the seventh. Augusta brought a leadoff walk around to score in the top of the eighth, putting the pressure on the Wildcats to match.

B-T loaded the bases with one out on walks by Emma Johnson, Sidney Smith and Lindsay Steien. With Chloe Wagner at bat, a passed ball allowed Johnson to tie the game before Wagner finished the at-bat with a walk to reload the bases.

Abby Thompson poked a single into center field to end it a batter later, ending an exciting game in style for B-T.

Chloe Wagner and Steien also led hitters with two hits and a walk each on the day. Thompson also reached three times on a hit and two walks, and Alivia Boe walked three times. B-T had six hits and 10 walks as a team.

Chloe Wagner became the third different pitcher to throw a no-hitter this season for the Wildcats last Thursday, and the second to do so against Whitehall.

Her six strikeouts in four innings pitched with only two walks allowed led a Wildcat rout of the Norse. Her performance also joined the company of Thompson’s five-inning no-hitter against Pepin/Alma the week prior and Steien’s three-inning perfect game earlier this year against Whitehall as the third B-T no-hitter thrown by the third different pitcher.

The Wildcats also tagged on plenty of run support in their four innings, thanks in part to an evenly-distributed 18 hits and six walks. Lexi Lofgren led hitters from the bottom of the order, tallying three hits including a double, driving in four and scoring twice. Kierstyn Kindschy, Chloe Wagner, McKenna Boe and Johnson all had two hits each as well. Wagner rounded out her impressive day on the mound with two walks at the plate in addition to her two hits, two runs scored and one RBI. One of McKenna Boe’s two hits was also a two-run home run in the opening frame.

A pair of four-hit days at the plate for Steien and Callie Wagner led the Wildcats to the win in the first of two in Greenwood on Saturday.

B-T jumped ahead 3-0 in the first inning thanks in part to an RBI double from Thompson and an RBI single by Callie Wagner to follow.

Greenwood pulled within 3-2 over the next two innings, before B-T pulled away in the top of the third. Smith singled home a pair to capitalize on a bases loaded chance, before Steien brought two more home with a double to push the lead to 7-2.

Both teams traded a run in the ensuing half-innings, before Callie Wagner doubled home two more runs in the top of the sixth. McKenna Boe followed with a double of her own, bringing home the third run of the inning to move the score to 11-3.

Thompson held up that lead on the mound, finishing a seven-inning complete game with four runs allowed, three earned on eight hits with nine struck out.

Steien laced three doubles among her four hits, leading to two runs scored and two RBIs. Callie Wagner doubled, drove in four and scored twice as well to cap off her four-hit day. Thompson, McKenna Boe and Johnson all also tallied two hits each as part of a 15-hit game for the Wildcats.

A five-run first carried the day despite only four team hits in game two against Greenwood on Saturday.

Trailing 1-0 after the top of the inning, B-T took what the pitcher was giving them as they walked six times in the inning to drive in three runs. The Wildcats also scored two on an error by the Greenwood catcher, capping a five-run inning without a swung bat leading to any of those runs scoring. Chloe Wagner singled and came around to score on a passed ball in the second inning, leading to a 6-1 score that held until the fourth.

Greenwood got an RBI single in the top of the fourth to pull within four, but Steien stopped a one-out rally from doing any more damage by retiring two of the next three on the mound. An RBI single by Alivia Boe and an error led to the final two runs scoring in the fourth and fifth innings respectively for the Wildcats.

Steien kept Greenwood’s offense in check, allowing just one earned run on three walks and five hits while striking out five. At the plate, she also set the table from the leadoff spot with three walks and two runs scored.