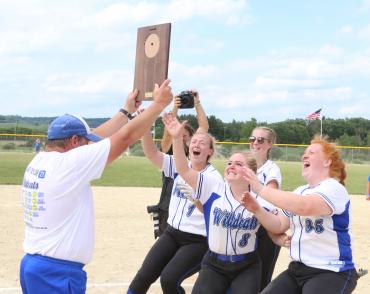 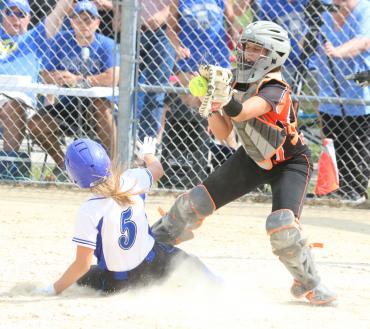 Leah Kidd slid home for the game-winning run for Blair-Taylor. 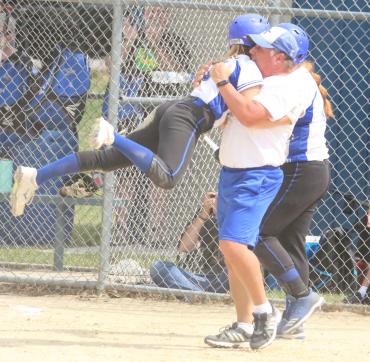 When Lindsay Steien slid into third base for a triple to start the seventh inning, Blair-Taylor softball coach Greg Bratina knew his team had a good chance at returning to the state tournament.

“You couldn’t ask for a better way for us to come up with our leadoff hitter LJ, who is a phenomenal hitter,” Bratina said. "When she laced that right down the left field line, I knew it was a double for sure, but with her wheels she got on third. I felt confident with my next two batters either hitting or bunting with Lindsay’s speed that we could get the tying run.”

Nothing had gone right for B-T early in the game. The first batter of the game sent a rocket over the fence in left field and three errors in the third put the Wildcats behind 5-0.

“I said ‘hey girls, keep your heads up,’” Bratina said. “Yeah, they’ve got five runs, but we’ve got five at-bats.”

The Wildcats began chipping away with two runs in the fourth and a two-run error in the bottom of the fifth had them within striking distance.

After getting out of a jam with runners on second and third in the top of the sixth, B-T stranded the tying run in the bottom half of the inning. Horicon threatened again in the seventh with a two-out double, but B-T’s Abby Thompson got out of trouble again.

Then Steien struck, ripping a 2-0 pitch just fair along the left field line. As the ball rolled to the fence she rounded second and slid into third before the throw could arrive for a triple.

Then, there was some doubt.

Chloe Wagner squared to bunt, but popped the ball up behind home plate for an easy out. Bratina went back to the bunt with the next hitter, Thompson, who got the ball to the ground. After a brief hesitation, Horicon pitcher Lizzy Gibbs threw to first for the out. That allowed Steien to come home, beating a throw to the plate as she slid head first for the tying run.

With two outs and the bases empty, B-T didn’t settle for the tie.

Alivia Boe immediately had the team threatening again, drilling a double into right field. As Leah Kidd replaced Boe as the courtesy runner, Callie Wagner put the first pitch she saw into center field, allowing the winning run to score and clinching a berth in the state tournament for the fourth straight season.

The game couldn’t have gotten off to a worse start for B-T as Horicon’s Alissa Jacobson put the second pitch she saw over the fence in left field.

B-T had two on in the bottom of the first, but couldn’t bring them home. They were retired in the second before Horicon seemed to break the game open.

Jacobson led off the third with a single. Emma Miller then bunted to sacrifice Jacobson into scoring position, but the throw to first with second baseman Lexi Lofgren covering was dropped, allowing Jacobson to come around and score.

After a walk, Horicon went back to the same play and it worked for them again as Lofgren wasn’t able to come up with another throw to first, loading the bases. Miller then scored on a sacrifice fly for the first out before Gibbs singled in a run, making the score 4-0.

A third error in the inning hurt B-T as Ella Vorlob bunted and this time Lofgren wasn’t able to keep her foot on the bag, allowing Horicon to load the bases with one out. The next batter flew out to center field, allowing one run to score. It appeared Horicon had runners on first and third after the sacrifice fly, but B-T appealed and the umpires ruled the runner who went from second to third left early and was out, ending the threat.

B-T didn’t go away after the tough inning, however.

“(I said) if we just get our offense going and clicking, we can chip away. The defense will come back and play strong,” Bratina said. “And that’s what we did.”

It didn’t look good for B-T right away as they had runners on second and third with one out in the third, but a pop up and a strikeout ended the threat.

Callie Wagner led off the bottom of the fourth with a triple before McKenna Boe put B-T on the board with a double. Boe later scored on a double steal.

Steien reached on an error to lead off the bottom of the fifth for B-T. After two fly outs, Alivia Boe was hit by a pitch, putting runners on first and second. A passed ball allowed both runners to move into scoring position before Callie Wagner hit into an error, allowing both to score.

Both teams had 10 hits in the game. Steien, Callie Wagner and Emma Johnson all had two for B-T.

Thompson got the win, allowing just one earned run as she walked two and struck out seven.

The Wildcats will play in the Wisconsin Interscholastic Athletic Association this coming Tuesday, the opponent had not yet been announced as of press time.

See the rest of this story along with photos and quotes in next week’s Times.