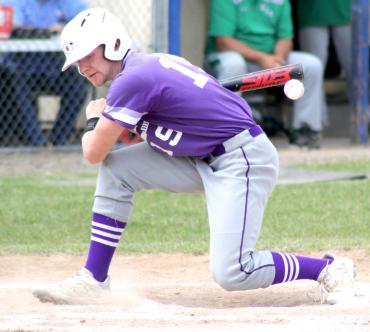 I/G senior Wyatt Kuerschner ducked away from an inside pitch during a WIAA Division 4 sectional semifinal loss to top-ranked Regis last Tuesday at Shell Lake High School. Kuerschner batted 2 for 4, but the Indees lost 7-5.            (Times photograph by Benjamin Pierce) 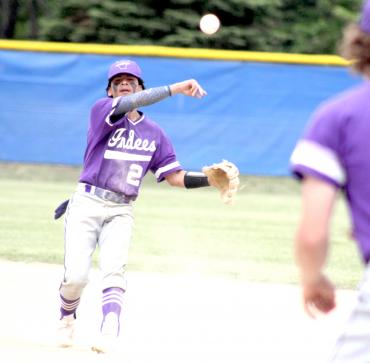 With a 3-0 lead through two and a half innings against the top-ranked team in Division 4 baseball last Tuesday, the Independence/Gilmanton baseball team was within reach of a trip to a sectional final.

The Indees were making solid contact on offense, and starting pitcher Hunter Guenther was keeping a strong Eau Claire Regis team at bay. But the Ramblers scored a trio of runs in the bottom half of the third inning to tie the game before pitching changes swung the game in a 7-5 win for Regis to end the Indees’ season.

Regis (20-1 this season) defeated Northwood/Solon Springs 14-10 in the sectional final the same day to advance to the state tournament.

“I thought we got off to a really good start. … and then they kind of got us to make it 3-3, and then I think we got a little tight,” I/G coach Pete Bartingale said after the game.

The Indees were having most of the fun in the batters’ box early at the neutral Shell Lake High School field, as Ben Pyka hit a double to open the game before he was brought home to open the scoring thanks to a single from teammate Wyatt Kuerschner.

Independence/Gilmanton added two more runs in the top of the third inning, and Guenther had held the Ramblers without a hit prior to their big third inning. Guenther’s arm got sore shortly after, and sophomore Brandon Sylla came on in relief in the fifth.

Regis kept the bats flying despite the pitcher change, using a pair of doubles in Sylla’s first inning to grab their first lead of the day, 5-3. They made their own change on the mound by turning to junior Zander Rockow, who piled up seven strikeouts in three innings of work.

The Indees struggled to adapt to a faster pitcher in Rockow despite some effort to do so by backing up in the batters’ box and lowering the bats, Bartingale said.

“Rockow pitched really well and kind of shut us down,” he said. “We just couldn’t get the flow there.”

Both teams added a pair of runs late, with the Indees getting their runs from a Sylla RBI single and a steal home from Kuerschner in the top of the seventh inning. Despite the loss, Bartingale said his group should be proud after a 14-8 season.

“It was a great season. The Dairyland Conference is really tough, and we battled all year long,” he said. “I thought we played our best baseball here at the end, but we just fell a little short here to the number one team in D4.”

Guenther finished with a pair of strikeouts while allowing four hits, and Sylla allowed four hits and one walk. The sophomore, alongside Kuerschner and Pyka, co-led the Indees on offense with two hits.

Bartingale said preparation for what happens now has already been discussed among the Indees, who have high hopes already for next spring.

“We’ll go back to the drawing board. Five of the last six years we’ve been here, so we’ve got to find a way to get through,” he said. “And that’s the goal for next year is to get through and get to state.”