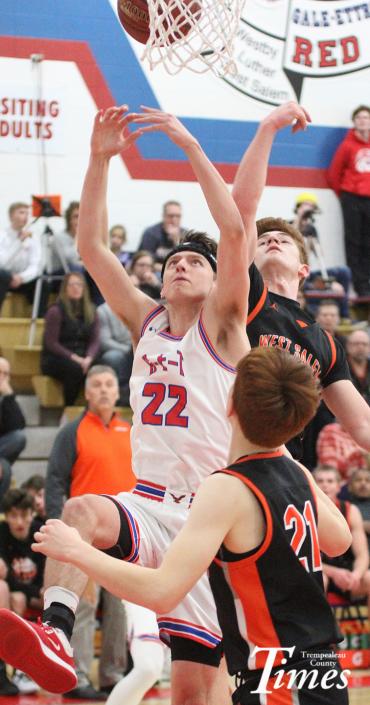 Kyle Scherr of Gale-Ettrick-Trempealeau rose for a layup during the Red Hawks' loss to West Salem on Friday. (Times photograph by Zac Bellman)

The Gale-Ettrick-Trempealeau boys entered last week very much in control of their own destiny in the Coulee Conference, but now find themselves relying on help and looking ahead to postseason seeding.

The Red Hawks faced the top two teams in their conference while entering the week in a three-way tie for first with Onalaska Luther and Black River Falls. However, a loss to Luther dropped them into a precarious position a game behind both teams. Then on Friday in a matchup of 5-3 Coulee teams, the West Salem Panthers got the best of G-E-T to drop the Red Hawks to 5-4. G-E-T also took a non-conference loss to Prescott to drop their overall record to 7-9.

G-E-T now sits in fourth in the conference, but still within a game of the three-way tie at 6-3 for first entering this week that includes West Salem, BRF and Luther. Viroqua joins the Red Hawks at 5-4 in the conference, creating a logjam in the standings to be sorted out by the final three Coulee games for each team. G-E-T plays their next three outside the Coulee first, including a matchup held Tuesday at 12-2 Altoona, a Saturday matchup hosting 11-5 Mauston and another home game next Tuesday against 4-13 Sparta.

A flat first half cost the Red Hawks in a critical Coulee contest with in Onalaska last Tuesday.

A 30.9 percent shooting night in which several of G-E-T’s scoring leaders struggled provided a recipe for disaster on the road. The visiting Red Hawks trailed 26-15 at half, and for the game hit three of 19 attempts from deep. Grant Beirne led scorers with 15, followed by Lance Lettner’s 10, eight from Sawyer Schmidt, four from Trent Harshman, three from Luke Vance and two from Kyle Scherr.

Schmidt led the team in assists with six, while Lettner added four. Scherr had eight boards to lead the Red Hawks, with Hammond and Schmidt adding five each, and Schmidt also led in steals with four.

A second-half collapse for the Red Hawks allowed West Salem to snatch a critical Coulee win away from G-E-T at home Friday night.

The Red Hawks got out to a hot start on an 8-0 run led by two Schmidt three-pointers and a dish from Lettner to Beirne for a layup. That lead held through the end of the first half as G-E-T took the 34-26 advantage into the break.

The lead held for the first couple minutes of the second half before a 14-0 run by the Panthers stole the momentum from the Red Hawks, as they suddenly trailed 48-39 with just over nine minutes remaining. G-E-T head coach Jared McCutchen said the run started with a zone defense that failed to stop Panther penetration for that stretch.

“In the second half we started off, and I think their first eight points were layups and they had two free-throws right away on a missed layup and a foul,” McCutchen said. “Defensively we struggled early, and then we just couldn’t get anything going offensively.”

Frustration for the Red Hawks appeared to set in as a couple early fouls put the bonus in play with several minutes left in the half. Offensively, G-E-T got another strong output of 30 points from Beirne that included five and-one opportunities this time out against the Panthers, but the scoring from players outside of him and 16 points from Sawyer Schmidt was sparse.

Scherr had four points, Hammond had three and Harshman added two for the game to round out G-E-T scoring. Two points from Scherr was the lone bucket not coming from Schmidt or Beirne in the second half.

“We need more production out of Ty Hammond and Lance Lettner and Kyle Scherr and Trent Harshman. Those guys get quite a few minutes and they worked their tails off to get us some good rebounds at times, and they get us some good steals...but we would like to see the ball go in the hoop a little bit more out of those guys, and it would make a big difference down the stretch here.” McCutchen said.

He added that the team cannot dwell on the loss, as they remain in critical position to improve their seeding this week and take their last shot at the conference to follow.

“We know we need a lot of help now from other teams in the Coulee if we want to be at the top in the end, but none of that matters. We need to take care of business in these last three Coulee games,” McCutchen said.

The Red Hawks surrendered four in double figures and trailed 36-24 at halftime on the road in Prescott on Saturday.

G-E-T played evenly with the Cardinals in the second half, but were unable to close the gap. Parker Nielsen led the Cardinals with 29, followed by Jacob Doffing with 14, Jordan Malmlov with 11 and Walker Lenz with 10. G-E-T stats were not made available by press time.