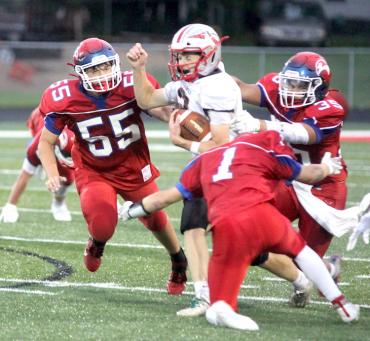 Early in the first quarter at Gale-Ettrick-Trempealeau High School on Friday, the Red Hawk defense showed it can stand tall when needed.

The offense, however, struggled to capitalize on the team’s early defensive success, and visiting Baldwin/Woodville coasted to a 28-0 victory.

The game was canceled early in the third quarter due to lightning.

G-E-T’s defense started strong, stopping the Blackhawks on 4th down in both of the visitors’ opening two drives.

Fourth down battles led to the game’s first score, as Baldwin/Woodville converted on a fourth-and-three near the 20-yard line before continuing down the field and scoring on another fourth down from the three-yard line.

But the Red Hawks got a late chance to claw back into the game, as junior linebacker Brady Seiling stopped a Baldwin/Woodville receiver on fourth down to give his offense the ball back.

The next play was an interception from G-E-T quarterback Justice Vaaler, and Baldwin/Woodville drove the field to make it 14-0 with less than two minutes to play in the first half.

After getting the ball back, Vaaler felt the pressure from the Blackhawk defense before trying to throw the ball out of bounds with 19 seconds left in the half. The pass was intercepted, and Baldwin/Woodville scored on a 33-yard pass on the next play to make it 21-0.

The visitors added another touchdown early in the second half before the game was canceled. Seiling forced a fumble on the play before the touchdown, but it was recovered by the offense.