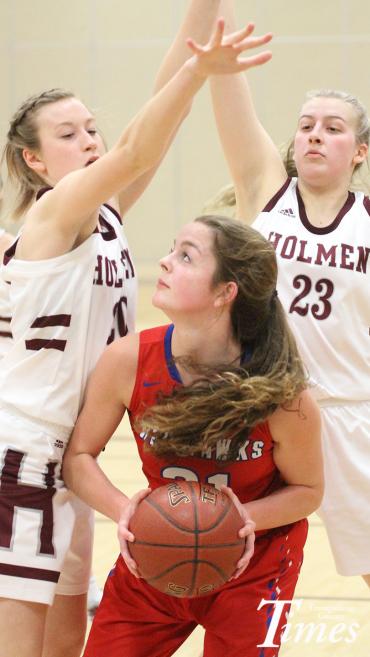 Cassy Schmitz of Gale-Ettrick-Trempealeau eyed the basket while guarded by a pair of Viking defenders during the Red Hawks' 50-41 loss to Holmen last Tuesday.

The first week after an injury to one of their leading scorers was a rough one for the Gale-Ettrick-Trempealeau girls basketball team.

A Red Hawk team that looked to be turning the corner with five-straight wins in January has now dropped four straight, including three last week on the road in Holmen, Westby and Prescott. No further information on the 63-41 loss to Prescott was sent to the Times by press time.

The two non-conference losses, as well as the Coulee Conference matchup with Westby have dropped G-E-T to 8-11 on the season, including a 4-5 record in the Coulee. The Red Hawks will have three chances to improve their Coulee record and playoff seeding over their final three scheduled regular season games. On Tuesday G-E-T hosted West Salem, their only scheduled contest until next Tuesday at conference-leading  (9-0) Arcadia. Their season wraps up at (1-7) Black River Falls a week from Friday.

In their first game after senior forward Rachel Amoth succumbed to an ankle sprain in practice last week, the G-E-T offense opted to slow things down in Holmen last Monday.

After a quick shot on the opening possession from the Vikings, G-E-T worked the ball around the perimeter for nearly a minute before settling for a jumper that missed. Red Hawk head coach Louis Hurd said the strategy was designed to help overcome mismatches and settle in defensively.

“We felt that we didn’t match up with them man-to-man very well, especially with Rachel out,” Hurd said. “I thought that they’re either gonna hit some shots or they’re gonna take some open ones and not hit ‘em and things would start to bounce our way. I really liked our game plan, and I thought our girls executed it very well.”

The strategy slowed down the scoring in the first half, as Holmen led 4-2 after four minutes. G-E-T drew even on a Genna O’Neill jumper two minutes later. Both teams traded leads steadily most of the rest of the half. Cassy Schmitz drained a three to tie the game at 12, and with less than two minutes left in the first half gave G-E-T the 15-14 lead with another triple.

A 15-3 run to start the second half carried the Vikings out to a 29-18 advantage over the first four minutes. Lindsey Lettner found the stroke from distance shortly after, leading a 9-2 run with three buckets from beyond-the-arc to pull G-E-T back within a 31-27 hole. The Red Hawks struggled to keep pace the rest of the way, as Holmen steadily built their lead at the line. The Vikings shot 18 of 25 from the free-throw line, while G-E-T hit just four of 11.

Despite the struggles down the stretch as O’Neill fouled out and Schmitz also dealt with foul trouble, Hurd lauded the effort of the depth that extended their usual roles.

For the game, Schmitz led scorers with 21 points, while Lettner added 12 and Anna Puent, Hunter, O’Neill and Hammond each had two. Schmitz also added nine rebounds to lead the team, and Hammond and O’Neill each had four assists.

Scoring struggles continued for the Red Hawks as they fell behind 35-14 at half and could not match the interior scorer of the Norsemen.

Westby outscored G-E-T 26-8 in the paint while shooting 46.8 percent from the floor to the Red Hawks’ 26 percent. The Norsemen’s paint penetration also led to 16 of 24 shooting from the free throw line, while G-E-T made two of six attempts.

Schmitz led scorers with seven, followed by Hunter’s six, Lettner’s five, Puent and O’Neill each with four and two from Kayli Bratberg. Three points went uncredited in stats provided to The Times. Lettner also led in rebounds with four, including three on the offensive end.