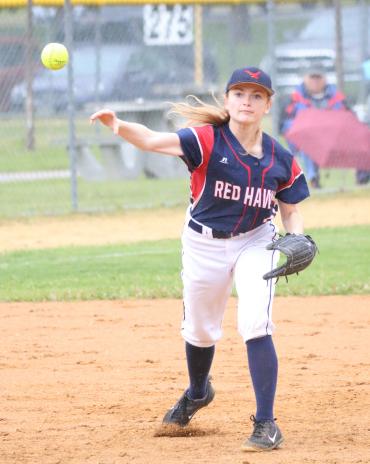 McKenna Johnson of Gale-Ettrick-Trempealeau threw to first for an out during their game against Arcadia last week Tuesday.                        (Times photograph by Andrew Dannehy)

G-E-T improved their standing in the conference with a rout of Onalaska Luther and a narrow win over Arcadia last Monday and Tuesday respectively. They were not as fortunate on Friday, taking a close loss outside of conference play to Onalaska High School to round out the week.

The Red Hawks are now 7-3 on the season, including a 4-2 mark in Coulee play. Their schedule heading into this week included a home doubleheader against West Salem on Monday, another home game Tuesday against Westby and another doubleheader at home against Holmen on Thursday.

Four hitters with at least two hits led the Red Hawks to victory last Monday against Luther, including two with a combined eight of the runs driven in for the game.

Anna Puent set the table from the leadoff spot, reaching on four hits including a double and scoring three times in the first four innings. Genna O’Neill and Ryann Duffenbach were the big run producers in the middle of the order however, as O’Neill drove in three on three hits including a double. Duffenbach also doubled, homered and drove in five RBIs on three hits as well.

Camery Holzer reached twice on a double and a base hit as well, as part of a 14-hit day for the Red Hawks. O’Neill earned the win on the mound, striking out six while allowing three hits and four walks.

A four-run first inning would prove to be all the run support needed for the Red Hawks to top Coulee rival Arcadia.

Puent and Lindsey Lettner reached on a walk and base hit respectively to lead off the game, before an error in center field allowed both to score. G-E-T continued to take advantage of Raider mistakes later in the inning, as O’Neill reached on a walk before Duffenbach reached on an error to put another two on. Both came around to score as well on another error as G-E-T took a 4-0 lead.

That score held until the fifth, when Hailey Sonsalla and Kianna Suchla set the table for the bottom of the order with a base hit and walk respectively. Maggie Kujak brought one home on a base hit, before Hallie Tulip drove in the other on a sacrifice fly to center field.

Arcadia loaded the bases with two outs in the bottom of the seventh, but O’Neill was able to induce a pop-up to second base to end the game.

The Red Hawks scattered six hits in a close game Friday against Onalaska, but were unable to match the Hilltoppers in a nonconference contest to end the week.

A leadoff base hit by Puent came around to score the first G-E-T run in the bottom of the first on an O’Neill groundout, but the Red Hawks left the tying run in scoring position after two Onalaska runs in the top half.

Another Hilltopper run scored in the fourth on a double-play that led to a runner crossing home away from the play. Duffenbach got the Red Hawks back within a run in the sixth with an RBI base hit, but was thrown out going for second to end the inning. Onalaska added an insurance run in the top of the seventh on an RBI double, and the Red Hawks were retired in order to close out the bottom half of the inning.

Lettner led hitters with two hits, while also stealing a base.