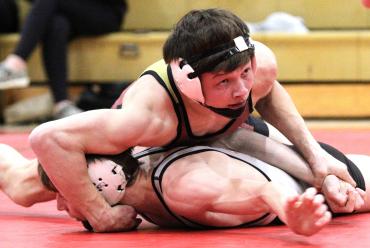 Tanner Andersen looked to the clock to see how much time was left in his match at 138 pounds against West Salem/Bangor’s Isaac Corbin in a home dual last Tuesday. Andersen's pin sealed the Gale-Ettrick-Trempealeau/Melrose-Mindoro co-op a 37-36 win.            (Times photograph by Benjamin Pierce)

Before Tanner Andersen set foot on the mat for the final match of a home wrestling dual against one of the best teams in the Coulee Conference last Tuesday, his coach’s advice was simple.

Gale-Ettrick-Trempealeau/Melrose-Mindoro coach Pete Peterson told the senior point blank — if Andersen pinned his opponent, the Titans were guaranteed the win.

The 138-pounder went to his “bread and butter” move in the second period, pinning the arm of West Salem/Bangor’s Isaac Corbin behind his back, grabbing his chin while hooking an ankle and flipping him over onto his back.

Andersen has long imagined pinning an opponent to win an event for his team, and the emotions flowed on Tuesday for both Andersen and his team.

“It’s always been my dream to have a duel come down to me, especially on my last ever home dual as a senior,” Andersen told the Times following the win.

The last weight class on Tuesday was 145 pounds, which G/M forfeited, but the Titans had enough of a point cushion with Andersen’s pin to win.

Peterson said his team wrestles one of the hardest schedules in the state, and beating the other main contender for the Coulee Conference championship was a “big one”. He praised Andersen for his work this year, and Tuesday was a fitting reward, the coach said.

“If I had to pick one kid where you need the pin, I’m sending Tanner Anderson,” Peterson said. “Tanner’s work ethic, his time he’s put into everything, he’s the real deal.”

Justice Vaaler (195) beat Chris Najera by an 11-4 decision for G/M, and Bradyn Lockington (220) pinned Hunter Anderson at 220 pounds. Tyden Jones was pinned in a long 5-minute match at 106 pounds, and Terek Fry won by pin at 113 pounds for the Titans.

A.J. Willette was pinned in a minute at 120 pounds.

West Salem/Bangor led 30-21 with just four weight classes left on Tuesday after the team’s traded wins in both the light and heavy weights.

Jackson Blaken pinned Ethan Smith in under a minute at 126 pounds to get G/M within three of the visiting Catbirds. A 12-1 major decision win for David Hiles (132) put the Titans in front by a point just before Andersen’s match to set up the walk-off win.

“David had an amazing match, and he’s struggled a little bit this season. So for him, he’s been putting the extra time in, so it really shone through,” Peterson said.

The teams will see each other soon, as the Coulee Conference wrestling tournament is scheduled for Saturday at Melrose-Mindoro High School.

Neither wrestler reached the podium as both were beaten by the eventual runner-up in their weight division.

Eichelt won her first two matches at 107 pounds before losing to Florence/Niagara sophomore Sophia Wagner (15-3 this season) by pin in 3 minutes, 50 seconds.

Eichelt (3-2) opened with a win over Richland Center’s Emma Hady by a 7-1 decision, followed by a 15-5 major decision win over senior Izzy Pfeifer (4-7) of Clinton.

After losing to Wagner, Eichelt rebounded with a 50-second pin over Allison Hunter of Merrill. She settled for eighth place, losing to Brianna Derouin of Menasha 4-1 in her final match.

Wieczorek (1-2) was bested in a tough matchup with Ozaukee sophomore Mya Delleree, who won in the form of a 54-second pin. Delleree placed second in the 114-pound bracket.

The G/M senior rebounded with a pin over Cora Tesch of Oregon, but her tournament ended when Ashlyn Grota of Oshkosh West pinned her in 42 seconds.

“We couldn’t have asked for more,” G/M assistant coach Zach Villarreal said of Saturday. “Obviously it sucks that they didn’t get to where they wanted to be, but it was exciting just to be at that type of tournament, the first one in Wisconsin.”