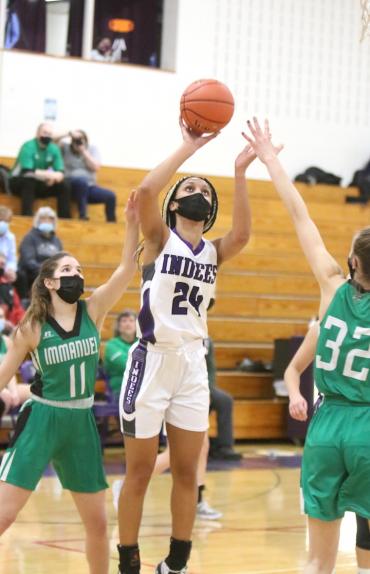 Perhaps the most productive season a girls basketball player has had in the county’s history earned Independence’s Ziy Conner a selection to the Wisconsin Basketball Coaches Association Division Five All-State team.

Conner, a senior, finished third in the state in points per game (25.7) and first in rebounds (16.3), leading the Indees to a 17-6 record and Wisconsin Interscholastic Athletic Association regional title. Independence’s season ended with a loss to eventual state champion Wisconsin Rapids Assumption in the sectional semifinal round.

She finished her Independence career with a school record 1,285 points, showing improvement of at least four points per game each year as she averaged 6.9 per game her freshman year. She shot 62.6 percent from the field for her career and 69.9 percent her senior year.

Rasmuson averaged 27.7 points per game in 1969-70, but only played nine games before suffering a knee injury. Halvorsen averaged 26.4 points per game for his high school career, but season records were not available beyond his senior year.

The only other girls player to average more than 23 points per game is Cathy Schaefer, who averaged 24.1 for Whitehall in 1993-94.

Sygulla is the only other player to average more than 15 rebounds per game, though that information is not available for Halvorsen.

Another Division Five All-State selection is surging up the area leader board for points scored.

Lindsay Steien — Eric’s daughter — was an honorable mention all-state pick after scoring 22.9 points per game for the Wildcats.

Steien, a sophomore, led the Wildcats to a share of the Dairyland Conference Large Division title before they fell to co-champion Cochrane-Fountain City in the regional final round. B-T played in Division Four in the tournament, but all-state teams were selected based on the division each school was slated to play in before the tournament began.

The guard averaged 22.9 points per game with a high mark of 32, shooting 41 percent from the field and 37.1 percent on three-point attempts.

She has already managed 940 career points, on pace to challenge her father’s county record of 1,985. Her brother, Kyle, finished his B-T career with more than 1,500 career points.