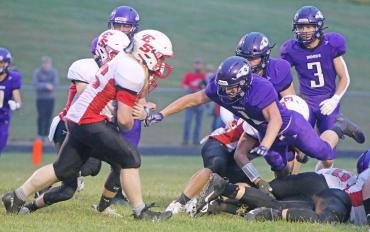 Independence/Gilmanton’s Mason Gierok dove into the backfield for a fourth down stop during their game against Eleva-Strum on Friday.                 (Times photograph by Andrew Dannehy)

A 17-game losing streak is over after the Independence/Gilmanton football team won its homecoming game over Eleva-Strum on Friday.

The Indees took an early lead then responded to every Cardinal score after as they held on for a 19-12 win.It was the first win for the program since a 22-0 victory over Eleva-Strum on Oct. 2, 2020.

The win put the Indees’ record at 1-4 on the season and 1-2 in Dairyland Conference play. They’ll welcome perhaps the best team in the conference this Friday when Pepin/Alma comes to Independence. The Eagles are coming off of a 45-36 win over Augusta as they sit at 5-0 on the season.

The Cardinals took momentum into halftime, but the Indees quickly got it back.

Eleva-Strum scored with just 19 seconds left in the first half to pull within one at 13-12 and that was as close as they’d get.

When the teams came out of the locker room, I/G’s Ben Pyka received kick to open the second half. He found space and sprinted 84 yards for a touchdown. The two-point try was stopped, but the Indees were back in control with a 19-12 lead.

Eleva-Strum’s next drive went to the I/G nine before they were pushed back and stopped on fourth-and-15.

The Indees forced punts on the next two Cardinals’ possessions then stopped Reede Brown for a six-yard loss on a fourth-and-two play with a minute left in the game. The Indees took over and ran the clock out.

It looked like it might be a rough game for the I/G defense when Ryan Julson broke free for a 58-yard run on the first play from scrimmage. I/G’s defense held up, however, as Mason Gierok flew into the line of scrimmage for a stop on a fourth-and-one play at the I/G five-yard line.

The Cardinals scored on their next drive as Brennan Hanner passed to Lagarrian Mitchell for 25 yards on a fourth-and-six play. Hanner finished the drive with a one-yard touchdown. The point after was blocked, however, so the Indees kept the lead.

I/G took more than five minutes off the clock as they answered with another touchdown.

The Indees overcame two blocking penalties on the drive, one negated a 17-yard run by Ben Pyka and the other  took away a 28-yard touchdown by Kingsbury. However, Kingsbury had 12-yard run on the drive and Santillan converted a fourth-and-one with a three-yard run. Gierok finished the drive with a 19-yard touchdown. The point after was blocked, but the Indees led 13-6 with 3:36 left in the half.

E-S used most of the rest of the quarter as Hanner passed to Mitchell for a 21-yard touchdown with 19 seconds left. Julson’s two-point run was stopped.

The Indees were outgunned by more than 100 yards as E-S ran for 228 yards, but the I/G defense came up big in key moments. The Cardinals were just one-for-14 on third downs and I/G got five fourth down stops.

Julson ran for 160 yards on 29 carries for the Cardinals, while Nathan Pyka led I/G with 41 yards on five attempts. Five different I/G players had at least five rushing attempts in the game.