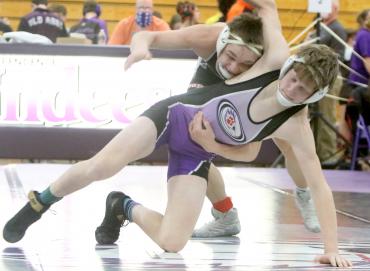 Gabe Pietrek of Independence/Gilmanton tried to escape from the bottom during his match at the Indee Invite in Independence on Saturday.            (Times photograph by Andrew Dannehy) 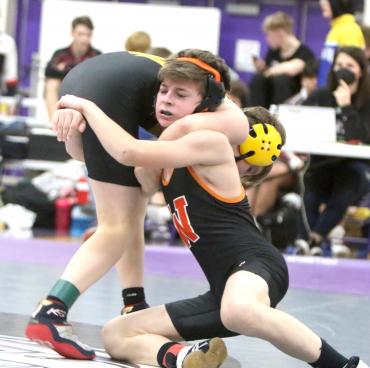 Whitehall’s Nolan Thompson went for a takedown during a match at the Indee Invite in Independence on Saturday.            (Times photograph by Andrew Dannehy)

The Independence/Gilmanton wrestling team finished fifth at the annual Indee Invite on Saturday.

Gavin Bragger had two byes before recording two pins, the first in 90 seconds and the second in 47 over Dylan Elvaker of B-T to win the championship.

Drew Bragger had a bye in the first round before recording three pins, including one in 2:55 over Ethan Brunner of Durand to win the title.

Gael Leon (126) finished second. The I/G wrestler recorded two pins before being pinned by Colin McKittrick of Royal in the first-place match.

Blaine Severson took third. He won his first two matches before being pinned by Whitehall’s Wylie Dunn. He rebounded with a win and then beat teammate Jacobo Medina in the third-place match by pin.

None of the other I/G wrestlers placed in the tournament.

Dunn and Alex Katzman (138) both took second for the Norse.

Katzman started with a bye before registering two pins in the first period. He was pinned by Jackson Whitney of M/N in the championship match.

Dunn cruised to the championship with two pins in less than three minutes. He ran into Westby’s Dylan Nottestad (36-1 record) and lost 5-1.

Bryan Rogstad (182) and Dylan Elvaker (195) both finished second for the Wildcats.

Rogstad beat Jacob Cooper of Eau Claire Memorial 10-7 to advance to the championship. But he lost to M/N’s Dalton Hoehn.

Elvaker had two byes then scored a 5-4 win in the semifinal before being pinned by I/G’s Gavin Bragger in the championship.

It was all forfeits for Whitehall and all but one forfeit for Blair-Taylor in Dairyland Conference wins over Cochrane-Fountain City on Thursday.

Both the Norse and the Wildcats wrestled the Pirates at C-FC, but the home team only had one active wrestler. The result was a 60-6 win for Whitehall and a 27-0 victory for B-T.

The teams wrestled in the Indee Invite on Saturday and will compete in another DC dual at B-T this Thursday.

The Norse lost the only match decided on the mat, but forfeits gave them an easy dual win.

A pin by Abraham Henderson over Broc Coburn gave the Pirates their only points.

The Wildcats blanked the Pirates as Ryan Flynn (152) beat Henderson 9-5.

There were double forfeits at all the other weight classes.