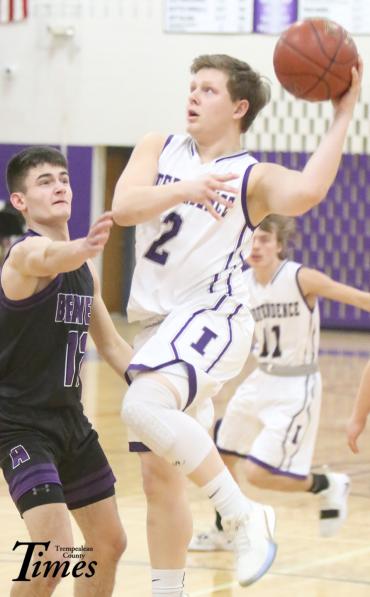 Creed Brenner of Independence put up a shot in the lane during their game against Augusta last week.

The Indees had their second-highest point total of the season in a 74-49 non-conference win over Coulee Christian last week Monday. On Tuesday and Thursday, however, they were held to 52 and 58 points in losses to Augusta and Eau Claire Immanuel Lutheran.

Entering this week with a record of 5-11 — 3-8 in Dairyland Conference play — the Indees hosted Spring Valley on Monday and went to Gilmanton on Friday. Independence was slated to play Necedah at home on Saturday with a game against Blair-Taylor set for this coming Tuesday.

With three players in double figures, the Indees took control of the game in the second half.

Independence had a three-point lead at halftime before their offense exploded for 45 points as they pulled away for the lopsided win.

Chris Killian and Ben Pyka both scored 17 points to lead the Indees while Tyler Kingsbury poured in 15. Creed Brenner finished with eight points followed by John Halama with seven, Alex Pfaff with six and both Wyatt Kuerschner and Dylan Marsolek scoring two.

After a close first half, the Indees had no answer for the Beavers in the second half.

Killian and Brenner battled the Beavers all game as the Indees trailed 28-25 at halftime. In the second half, however, Augusta was able to knock down shots from the outside and attacked the basket, earning 29 free-throw attempts for the game.

The Beavers made 16 of their 29 free throws and shot 36 percent from the field, including seven-of-22 from three-point attempts. They were able to control the glass as Aaron Dorf had 21 of their 39 rebounds. Jacob Engstrom scored 21 points for Augusta and Andrew Perkovich added 19.

The Lancers nearly ran the Indees out of the gym with 47 points in the first half as Independence never recovered.

Independence’s offense got going in the second half as they put up 35 points, but ECI still nearly matched them after taking a 24-point lead into the intermission.

The Lancers shot 53 percent from the field, including six made three pointers. Ryan Zimmerman scored a game-high 26 points while Ben Oster added 16 and 13 rebounds and Isaiah Plath scored 14.

Killian’s 16 points led the Indees as Kingsbury and John Roskos were also in double figures with 11 and 10 points. Brenner and Marsolek both scored seven, Pyka finished with three and Pfaff and Halama had two.