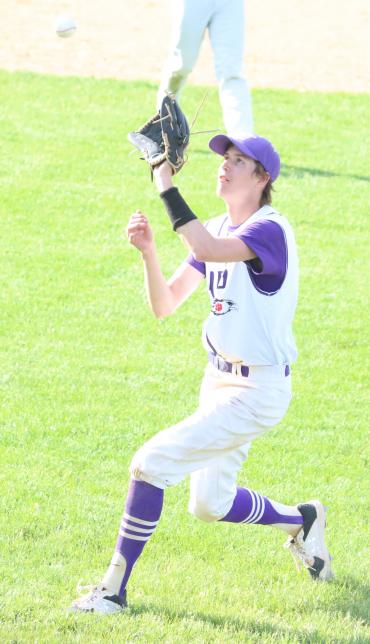 Hunter Guenther of Independence/Gilmanton ran up to catch a pop up during their regional semifinal game against Alma/Pepin last week Tuesday.            (Times photograph by Andrew Dannehy)

The Independence/Gilmanton baseball team did what coach Peter Bartingale said it needed to do, scoring four runs in the bottom of the sixth to win the regional title over Cochrane-Fountain City last week Wednesday.

“You’ve just got to survive, keep the game close and hopefully win it at the end,” Bartingale said following his team’s 6-4 regional final win.

The Indees trailed 4-2 after the Pirates scored two runs in the top of the fifth inning. I/G had the heart of its order up and needed to make noise in the bottom of the sixth.

Hunter Guenther got what would be the team’s final at-bat started with a double to the warning track in center field. C-FC coach Bill Wilhelmi then took out starting pitcher Abraham Henderson in favor of Tanner Scheiffer, but the new pitcher struggled to find the strike zone.

Wyatt Kuerschner was walked in four pitches, Brandon Sylla was then hit by a pitch, loading the bases with no outs. Tyler Brantner took two straight balls before Scheiffer’s first strike. Brantner, however, also walked, bringing in a run. Xavier Santillan then hit a sacrifice fly, which scored the tying run.

Another hit batter loaded the bases before a strikeout for the second out of the inning. More control issues helped put the Indees ahead, however, as they scored two more runs without putting the ball in play.

Ben Pyka took a ball high on a 3-2 count to bring home the go-ahead run. It looked like another run would come home when Gael Leon was hit, but the umpire ruled that the I/G batter did not do enough to move out of the way of the pitch. That run scored anyway, however, as the next pitch went to the backstop, and Tyler Brantner came home to put the Indees ahead 6-4.

Sylla finished the complete game by retiring the last six batters he faced, including all three in the top of the seventh. After a pop up and a ground out to first, Sylla got some help as Kuerschner made a diving catch near the warning track in center field to clinch the win.

The Pirates took the lead in the third as a single and a walk was followed by another single and an error. The Indees responded in the bottom half of that inning as Guenther smashed a two-run home run.

“I don’t think we were ever out of the game, I really don’t,” Bartingale said. “It was one of those games that kind of went back and forth.”

The Indees got in trouble again in the fifth as C-FC connected on three straight hits.  Austin Becker doubled, Caleb Nisbit singled and Henderson doubled to put the Pirates ahead 4-2. The I/G coach didn’t lose confidence in his pitcher, however, saying Sylla pitched an amazing game.

“If Brandon can get on top early and get things going early, he’s tough throughout the whole game,” Bartingale said. “His key is getting the curve ball across, he did that. He kept batters off balance to the best of his ability, but that team is arguably one of the best hitting teams we’ve played all year.”

Sylla didn’t allow another base runner the rest of the game after getting out of the fifth-inning jam with a groundout. Sylla struck out three batters while allowing six hits and one walk in the complete game win.

The Indees were the second seed and hosted the regional final after C-FC (10-16 on the season) upset Eleva-Strum, the top seed in the regional. Bartingale said avoiding the top seed did not give his team more confidence entering the game.

“Actually, (C-FC) was a very dangerous team,” the I/G coach said. “One-through-nine they put the ball in play and that’s the way his teams are. When I saw that we had to play them, I was very concerned.”

What did give his team confidence, however, was the success of the program. Bartingale, which has advanced to the sectional round four of the last five seasons, including in 2021.

“You know, this program, we’ve had a lot of success,” Bartingale, who has been the head coach since 2019 after serving as an assistant for three years. “I think that’s a part of it, you know, you can believe and I think this group believed.”

The Indees had five hits in the game, led by Guenther who was three-for-three with a double and a home run.

The Indees advanced to the regional final game after pulling away from the Eagles late.

Both teams scored one in the first inning. Guenther doubled home Leon in the first then doubled in two runs in the second to put the Indees ahead 3-1.

That Indees added another run in the fifth when Kuerschner and Sylla hit consecutive singles.

Guenther again came through for the Indees in the sixth as he doubled again as part of a four-run inning that put the Indees ahead 8-1.

The Eagles scored two in the top of the seventh, but the Indees maintained control.

Guenther was also the winning pitcher, striking out 15 batters before being replaced by Pyka in the seventh. He was three-for-four at the plate with three doubles, while Kuerschner added two hits.

The Indees (14-7) began sectional competition on Tuesday of this week, playing Eau Claire Regis in Shell Lake. The Ramblers went into the game with an 18-1 record and were ranked first in Division Four.

The winner of that game will play the winner of the game between Siren (10-11) and Northwood/Solon Springs (20-3). N/SS is the third-ranked team in Division Four.

The Division Four portion of the Wisconsin Interscholastic Athletic Association State Tournament will begin next week Wednesday at 8 a.m. with the championship set for Thursday at 9 a.m. State tournament games will be played at Neuroscience Group Field at Fox Cities Stadium, Grand Chute