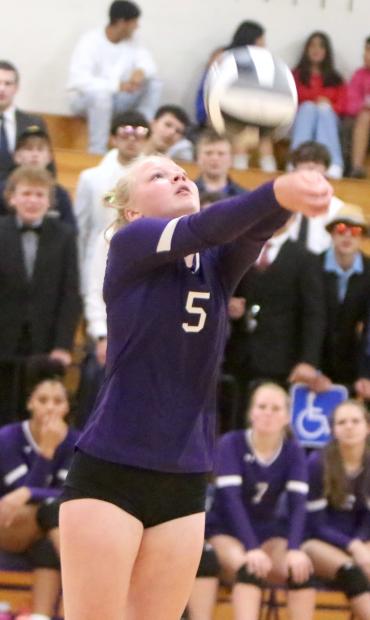 After being swept at home against Blair-Taylor, the Independence volleyball team got a sweep of its own last week.

The Indees took an early lead, but couldn’t finish against B-T (see story elsewhere in Sports) last week Tuesday, but on Thursday they were in control, winning all three sets in Gilmanton by double digits.

Independence enters this week with a match record of 4-7, including a 1-2 mark in Dairyland Conference play. They were slated to play Coulee Christian on Monday and Augusta on Tuesday of this week. This coming Tuesday, they’ll play in Whitehall.

With 16 services aces, the Independence volleyball team controlled the match.

Makiyah Scow led the team with nine aces, while both Adison Pronschinske and Rhianna Thesen had two, Amiah Ives, Kassidi Dejno and Maggie Woychik all had one. The Indees won the first two sets by 11 points then dominated the third with a 19-point victory.

Woychik led the team at the net with nine kills, two more than Theisen while Scow and Dejno both had three and Ives finished with one. Ives led the team with two blocks.

Adison Pronschinske’s 14 assists were a team-high while Scow added four and Ives finished with one. Pronschinske also had eight digs, second-most on the team behind Dejno’s 10. Theisen and Ives both had five digs, Arabelle Kniseley and Scow had three, Jasmine Montalvo finished with two and both Avery Halama and Woychik had one.